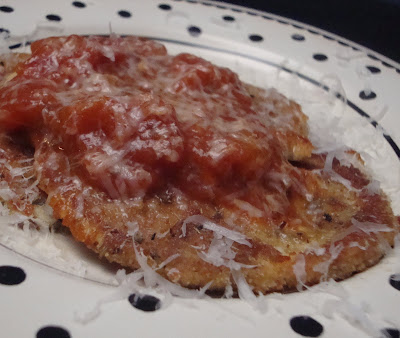 Tonight is the second night of Chanukkah, and I could have happily served latkes (potato pancakes) - I adore them! But I wanted something different, something that celebrates both culinary traditions for this holiday: the oil and the dairy.

Most people, if they know anything about Chanukkah, think of it as a festival of fried foods commemorating the miracle of 1 day's worth of oil having burned for 8 days. But there is also the story of Judith feeding generous quantities of cheese to the captain of the enemy's army, to make him thirsty and encourage him to drink himself into a stupor. Once he fell asleep (or, rather, passed out), she cut off his head. The leaderless troops then retreated, and the Jews were ultimately able to rededicate the Temple with the miraculous oil that burned brightly for 7 extra days.

So I decided to fry some cheese in a bit of oil, thus doubling the celebration!

I dare to announce that this dish - Provolone Fritto [proh-voh-LOH-nay FREE-toh], topped with a marinara sauce - may even be more delicious than latkes! I know that's a radical statement to be making; but try this and see. It's crispy, it's gooey, it's flavorful ... truly, it's a fabulous dish!

Place the flour into a flat bowl (i.e.: a cereal bowl) and stir in 1 teaspoon of the salt along with the pepper.

Place the eggs into a flat bowl (i.e.: a cereal bowl) and mix in the pesto with a fork.

Place the bread crumbs, the Italian seasoning and the remaining 1/2 teaspoon of salt onto a plate; combine well.

Heat 3 tablespoons of the oil in a large skillet over medium heat. One by one, dredge the slices of Provolone first in the flour, then in the eggs. Place them into the bread crumb mixture and make sure they're well coated.

Place 3-4 breaded slices into the skillet and cook for 3 minutes until the edges are turning golden and the cheese starts to puff a bit. Flip the cheese over. 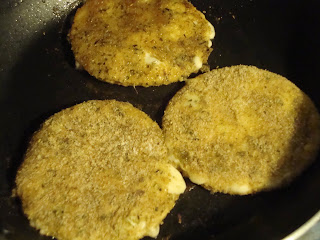 Cook for another 2-3 minutes until both sides of the cheese are golden and crisp.

Continue frying the cheese until all of the ingredients are used up. Place onto a serving platter, top with marinara sauce and Parmesan.

Ok, now who's the temptress so early in the morning? I love cheese, but fried cheese is my ultimate weakness. You are a genius!

Love these posts, Mary! So interesting. I'm familiar with the account of Jael driving a stake through Sisera's head, but didn't know about Judith. It's an exciting story to tell the grandkids, especially since Judith is their grandma's name!

I didn't know the story about Judith either! These posts are awesome, Mary. And with fried cheese?! How can you go wrong!