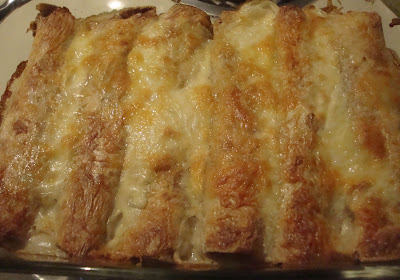 Technically, these are not actually "enchiladas" although they bear a resemblance to the traditional dish. According to Wikipedia: "The Real Academia Española defines the word enchilada, as used in El Salvador, Guatemala, Honduras, Mexico, and Nicaragua, as a rolled maize tortilla stuffed with meat and covered with a tomato and chile sauce."

Well, let's see -- how many ways did I violate this definition???

- Whole wheat tortillas instead of corn
- two kinds of beans, but no meat
- no tomatoes in the sauce, only cheese

But there are chiles in the sauce, so I'm going to call these enchiladas anyway, based upon the following statement: "Enchilada is the past participle of Spanish enchilar, 'to add chile pepper to,' literally to 'season (or decorate) with chile."

I feel better now! Enchiladas these will be!!!

I had left a package of tortillas in the freezer at Tom's house, and they had no kosher certification so I couldn't take them back to the apartment I'm staying at. Tom had some leftover Cuban beans from Trader Joe's (black beans in a seasoned sauce), and there was also a can of red kidney beans in his pantry, each seeking a purpose in life.

On top of that, Wholly Guacamole had written to me recently asking me to look over a new website they'd launched, and even offering to send me samples of their products to try ... clearly, the presumption was that I would share all of this with my faithful followers and rave about it with an abundance of praise.

Well, I don't do product reviews because I don't want there to be any hint that I might offer a favorable opinion based upon having received a gift. So I told them this while thanking them for the offer, and they told me they'd still like me to try the items ... wow, that was unexpected! 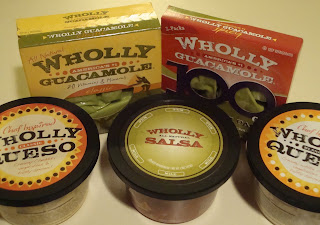 So, I received a large box that had been very generously filled with guacamole and salsa, which are kosher, and two containers of queso sauce, which is not. I brought the queso to Tom's, and then we tried to figure out what to do with it.

(Wait a second -- how do you say that in Spanish, which I've never studied ... okay, Y aquí -- an epiphany! God I love Yahoo's Babel Fish translation site! It lets me translate or -- more importantly -- confirm that I'm not misspeaking and embarrassing myself with my severely limited Italian and unbelievably rusty French!)

So I combined the beans, tossed in some of the salsa, rolled the mixture up into tortillas, placed the filled tortillas into a casserole dish, and poured some of the queso sauce over everything. Oh, man, did the house smell good as this baked!

Tom dipped into them and stated very simply and succinctly: "Very tasty, my dear." It was a perfect transformation of leftovers into an entirely different meal, and one that was sublime.

(Okay, so that was bad! You know you still love me anyway, and you'll be back tomorrow to see what my latest kitchen adventure will be. And, of course, I'll welcome you as always, looking forward to seeing you again!)

Combine the Cuban beans, kidney beans, salsa, salt and chili garlic sauce in a medium bowl; using a potato masher, mash the mixture a bit to break up some of the beans.

Lay the tortillas out on the counter, and divide the bean mixture among them by placing the beans in the middle of each tortilla. 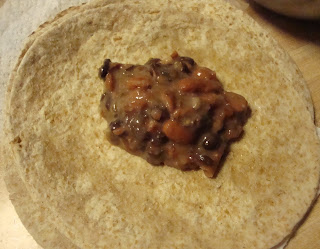 Spread the beans out into a line not quite reaching the edge of the tortilla, then roll each one up and place it into the prepared casserole dish. 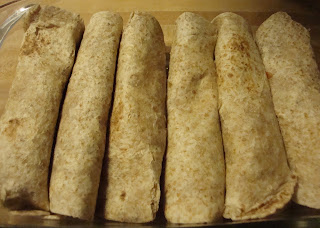 Pour the queso sauce over the tortillas, then sprinkle the cheese over that. 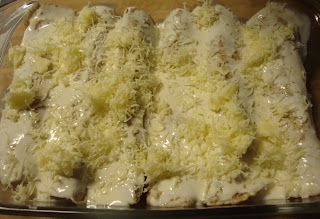 Bake for 30 minutes until the enchiladas are golden and the sauce is bubbling.

LOL.. too funny.. I got product from Wholly Guacamole too!! I was actually impressed with their stuff.
Anyway.. your enchilada's look incredibly good... and if you had not told me the true definition, I would have never questioned you calling them that!!

Hey, it's your blog and your recipe, you can call it anything you want. Your enchiladas look delicious!

They look delicious!! I was sure that they were enchiladas. We are HUGE fans of Mexican and Mexican inspired food over here. I am totally convinced that you can put anything inside of a tortilla...of any variety. I didn't know that my "enchiladas" were not really "enchiladas". They rarely are in corn tortillas but are usually in a tomato-ey sauce. I really liked the Wholly Guacamole but haven't tried the other products. The guac is not my homemade guac but it is great to take a small package with me for lunch and just right to spread on sandwiches. It's pretty healthy for processed package food too which is a bonus. I absolutely adore queso but haven't seen that particular product in the store. I'm sure it was awesome! Great job, Mary!

heh. I didn't know the difference between a burrito and an enchilada either. I guess it's more along the lines of baked in a saucy thing.

Well, I'll be waiting for my package from Wholly Guacamole! LOL Actually, I'd never heard of that brand until I asked our son to pick up some good guacamole that doesn't have all the poisons in it. I think he knows what that means by now. He brought home Wholly Guacamole and we love it! I like making my own guacamole when avocados aren't so expensive, but this works too. The recipe will be on my menu plan next week. I love enchiladas or even improvised enchiladas!

Okay, first of all...YUM! Second of all, I love your new design...it looks awesome! Thaks for sharing this w/ the hearth and soul hop this week, Mary.

You've done it again! I LOVE this!! Miriam@Meatless Meals For Meat Eaters

Hi Mary,
Your Enchiladas look so delicious. Thank you so much for sharing and have a nice day!

Thanks for joining Good Friends Just Click! I'm GFC following. Hope to see you next week!

As usual, I enjoyed seeing your recipes in transition! I wonder if there was any sampling along the way with these tasty treats. So much to dip your finger into :)

Now you know I am loving this recipe. I love any type of Mexican food.
Thanks for always sharing your great recipes!

Thanks for participating in the Good Friends Click Blog Hop! New follower! I have lots of giveaways ending Thursday and I would love a follow back!