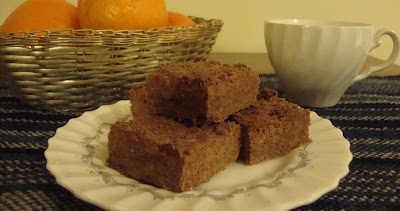 I think, perhaps, I need a 12-step program for shortbread cookies: I've featured Ginger Shortbread and Scottish Oatmeal Shortbread in recent weeks, and now I'm offering yet another variation on this simple but truly special treat!

I first made this recipe ages ago, and wrote about it for AnnArbor.com. All of my bubbes ([BUH-bee] = "grandmother" in Yiddish), the inspirational women in their 80s and 90s who have adopted me and taught me to play mah jong, cut it out of the print edition (AnnArbor.com is an online news source that also publishes hard copies on Thursdays and Sundays) and baked the cookies themselves. The friend whose apartment I'm staying at has raved about these treats, had her sons bake a batch for her, and even asked me to email the recipe on her behalf to a woman who was making up a cookbook for her daughter's Bat Mitzvah by collecting favorite recipes from loved ones.

And, most touching of all, when I walked into the kitchen to put away groceries on my first night here, I saw a handwritten copy of my recipe taped to the cupboard door; this had been copied down after the clipping had been lost. So, of course, I baked a batch to send to my friend as a woefully inadequate but still heartfelt "thanks" for her generosity in welcoming me to her home.

I'll warn you that the mixture is very dry and crumbly before it's baked; you'll wonder how this is ever going to meld together into a cookie, rather than something resembling graham cracker crumbs. Trust me. Look at the picture above to see how beautifully they turn out! They're rich, buttery, and utterly perfect with coffee, tea, milk, cocoa, or just on their own.

In a large bowl, combine the butter, salt and sugar; stir in the cocoa powder and cinnamon. Stir in the flour and, if using, the pecans.

Using damp hands, press the mixture into the prepared pan and flatten it. Bake for 30 minutes until the edges are just turning golden.

Let the shortbread rest for 10 minutes, then use a sharp knife to trim the edges and cut into squares. 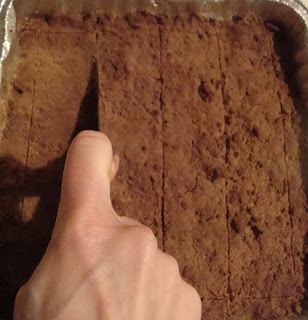 I love shortbread and could eat it all day every day! I restrict myself to cooking it only at Christmas time or I would be the size of a house! I will have to remember this recipe come December.

I would prefer that you do not attend those 12 step programs.. I love shortbread cookies... bring them on!!! And if they are chocolate...well, then, I'll eat even more!

Oh these look good. I want to make them and I'm fighting the urge to figure out if I can lower the fat. haha I'm so bad! And, am I really behind the times in noticing your new page format? Love it!

What a great post AND a great recipe too! Keep that shortbread coming, girl. I, for one, am not complaining. Have a wonderful weekend, Mary! hugs, Candace

Awesome recipe, sweet story. I love Shortbread, but more than that, I love old ladies who love shortbread.

Who does not love shortbread! But I've never even heard of chocolate shortbread before. I've got to try this.

I Am Not Superwoman said...

These look yummy. Following you from a blog hop.

Keep your shortbread recipes coming! I love that you posted your TOH/CBS video. You are so pretty and poised. Well done. I can only speak for myself but when I've done TV demos I'm usually having a cow on the inside. You look so calm.

I noticed the recipe calls for 1 cup of butter. Now this is my kind of baked good. I could eat shortbread 3 times a day and will certainly add this to my list. Thanks for sharing. I'll have my large square with a perfect cup of tea.

OK...my b-day is tomorrow and I've been looking for what I can make for myself as a carby splurge...I think these are IT! :) WooHoo!

The Ginger shortbread recipe sounds amazing, I'm going to take a look at that next because my husband loves ginger. Following you from the Fun Follow Friday, please stop by and visit us if you like: Midwestern Moms

Hey Girlie! That sounds absolutely divine! Is it like a crisp brownie? It doesn't look as thin as I would normally expect a shortbread cookie to be.

Glad to see you still blogging and praying for your peace and happiness!

Stopping in from Fun Follow Friday!
~ Sweet Mummy @ It's OK to be WEIRD!

Ohhhh my!!! Do these look yummy or what?? I found your blog through the 40 Friday group, I just joined yesterday....following you:)
DO you live in Michigan? I do:)
Nice to meet you!

Those defy my typical expectations of shortbread! I will have to add this to my cookie-jar list. Another win.

OMG! Chocolate and shortbread together! MMMMMMM! New follower from the I love my online friends blog hop! Happy Valentines day! Come and visit me at www.mandysescape.blogspot.com

YUM!!! I definitely have to try this recipe!

Glad I found you at I Love My Online Friends hop! Hope you can stop by www.magicalmouseschoolhouse.com, where Disney IS school. FREE T-shirt to new followers this month!

Hey there, I'm a new follower from the 'ILMOF' blog hop! As soon as I seen your title I knew I'd be thrilled to be a follower. I am big on food and look forward to your future posts! Have a great Monday!

Oh, I can be seduced by sushi but cannot stand most cooked fish. Weird huh?

New follower from the hop!

I'm a newlywed with a short food resume, so a good food blog is just what I need! I'm your newest follower--found you through "I Love My Online Friends!"

Great recipe~love shortbread! I am always hunting for recipes~I am a new follower from the Friday Blog hop!
Stop by and say hello
Jamie
Applesauce Inn Bed & Breakfast

Excellent recipe. I'm intrigued by the prospect of cinnamon and cocoa.
I also will never try sushi.
Visiting from Edge of Escape