Teasing on a Tuesday

I haven't dropped in on the literary club known as Teaser Tuesdays for ages, but thought I'd give it a whirl today since I'm actually reading a food-related book.

Knives at Dawn: America's Quest for Culinary Glory at the Legendary Bocuse d'Or Competition, by Andrew Friedman, is an in-depth look at the most prestigious cooking competition in the world, which features some of the true stars of the culinary universe -- Daniel Boulud, Thomas Keller, chefs from California's famous restaurant The French Laundry -- as they prepared to represent the United States in 2009.

The Bocuse d'Or [boh-KOOS DOHR] is held every two years, and the 2011 edition was completed only last week; it's rather like the Olympics, in that countries are represented by teams of chefs who are cheered on by avid spectators. According to Wikipedia, "The audience atmosphere of the Bocuse d'Or evolved in 1997 when the support for the Mexican candidate included a mariachi band, foghorns, cowbells, cheering and yelling from the stands ...."

Although the French have won 6 of the 11 events, Scandinavia swept everyone else away this year: the winners were Denmark, Sweden and Norway, respectively. Here is a very brief summary of what was expected of the competitors, summed up on 911cheferic.com:

Once the pairs from each country enter the main stage area, they are given a fully equipped 18 X 2 meter kitchen cubicle, and have five hours to prepare a meat dish and a fish dish using ingredients selected by the Bocuse d’Or committee. However, each chef must provide the serving platters, all specialized cooking equipment and all of the food ingredients, with the exception of the designated meat and fish items. Both platters must be presented with a choice of three different garnishes and must contain a total of twelve servings. Two portions are plated for presentation and for the official photograph. The competition jury comprises some of the most renowned chefs from each of the 24 countries, all of whom expect to be thoroughly wowed by the taste, creativity and presentation of each dish.

Now, having read that, be sure to check out the Facebook page of Denmark's team leader, Rasmus Kofoed to see the winning dishes ... truly, works of art! (I'd simply place the photos here myself, but I don't want to infringe upon anyone's rights.)

So, anyway, meandering back to the original intent of this post .... 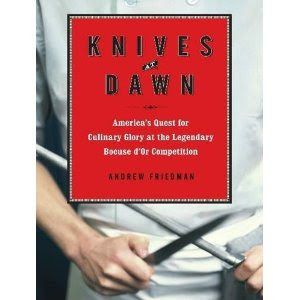 I'm reading a book about this intense culinary competition, for which teams raise money, chefs take leaves of absence from their day jobs to practice for months at a time, and teams compete for a prize of 20,000 Euros. Therefore, let me finally get around to sharing a tantalizing tidbit with you, per the rules ....

"Teaser Tuesdays is a weekly bookish meme, hosted by MizB of Should Be Reading. Anyone can play along! Just do the following:

• Open to a random page

• Share two (2) 'teaser' sentences from somewhere on that page

• BE CAREFUL NOT TO INCLUDE SPOILERS! (Make sure that what you share doesn’t give too much away! You don’t want to ruin the book for others!)

• Share the title & author, too, so that other TT participants can add the book to their TBR Lists if they like your teasers!"

"During that time, Skeie thought about his cuisine, not cooking even one garnish, but instead visualizing elements and compositions, imagining their flavors and how they would harmonize, taking them apart and reassembling them in his mind. In September 2008, about the same time Hollingsworth was finalizing his dishes for Orlando, Skeie was taking his actual Bocuse d'Or food out for a test drive in a kitchen outfitted with the same equipment he'd be using in Lyon; he'd have started earlier, but his participation in the Bocuse d'Or Europe in July (one of the continental contests that had been introduced in recent years), ironically, distracted him from the upcoming world competition."
Posted by Yenta Mary at 6:00 AM

I have never heard of the Bocuse d'Or. But, than again, I'm not a chef. That was a different teaser for sure today. It was fun learning something new.

I've read about the Bocuse d'Or before..it's insane! I love this line....
"visualizing elements and compositions, imagining their flavors and how they would harmonize, taking them apart and reassembling them in his mind"
That's what I want to do some day!! lol

Oh, I love this, and think I might have to read this book. I have to admit - other than cookbooks, I've never taken on a BOOK that is food related like this. I'm a sucker for cooking competitions (and Bocuse d'Or is the creme de la creme!) My speed is usually Top Chef, Iron Chef or Food Network Challenges - but I LOVE them all. True artists, don't you think? I may have to look into this book. Thanks for sharing with us all!

That was a really great teaser and I love the theme of your blog. Thanks for sharing.

My Teaser is a little different.

That competition sounds fascinating! Congratulations to the Scandinavians. :-)

I'm checking out the book meme. Thanks.

Fun post Mary! My last food related read was Kitchen Confidential. I thought I lost it before reading the last 2 chapters but I am happy to report that I found it under a seat in my car. Sounds like a great activity for this horrible weather.

A sort of cookery olympics? I'm astonished that I haven't heard of this before, thanks so much for telling me about it :)

Wow - this sounds like some intense food competition! I would really enjoy this book. Here's mine:
http://www.southernfiberreads.com/2011/02/teaser-tuesday.html

I think I would enjoy reading that book. What a fun meme too! I'm going to have to add that to my blog hop list and join in sometime. Take care! Candace

I like this teaser! It's a good reminder that cooking is an art and at times, a very creative process.

Great teaser!! I haven't heard of this one yet. Thank you for sharing!

Love the look of your blog and love the name. New Follower.

Cooking competitions I can't imagine there would be no way I would be in one lol.