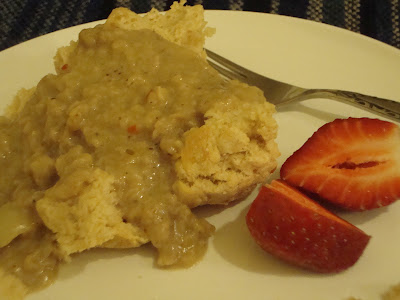 Who needs Presidents' Day, especially since I don't even get the day off??? (Don't get it officially anyway; but the 10" of snow we got, after a prediction of 2-3", is at least now giving me the morning to myself.)

But even better, today is also National Biscuits 'n' Gravy Day ... now, that's a holiday that just makes a girl want to smile ... :)

Except that this girl is now living (quite peacefully and contentedly, too, I might add) in a kosher home with a vegetarian kitchen. Hmmm .... This poses a bit of a dilemma, doesn't it???

I could invite myself to a friend's house -- an offer to make sausage gravy and homemade biscuits should naturally endear me to anyone! But there's not a lot of adventure in that, is there? Nah!

So, let's do it ... let's try a new project: make biscuits 'n' gravy with no pork, no mixing of meat and dairy, no lard, none of the usual ingredients. Today's challenge, then, was to make a vegetarian version of this traditional Southern favorite.

Now, the first order of business was to find a bulk vegetarian sausage. Did that, opened it up with a bit of trepidation, found that it smelled kinda sorta like sausage ... okay, off to a good start.

Then I tried to brown the "sausage." Pork sausage breaks up readily when pushed with a spoon; soy protein wasn't quite so cooperative. A little pushing, a little shoving, a bit of force, a few threats, and finally the stuff broke down into crumbles instead of huge chunks ... oy. A little flour, some skim milk, a sprinkle of seasonings, and I actually had something that looked remarkably like the original! I let it sit in the refrigerator overnight for the flavors to blend.

The next day, I placed the gravy back into a saucepan and had to thin it out after it had thickened considerably. As I reheated that part of dinner, I set about making some good ol'-fashioned wholesome biscuits.

Half whole wheat flour, half white flour ... a bit of baking powder and some salt. I cut in the butter and found that it wasn't turning into the mealy mixture it's supposed to. (Remember, I didn't have my usual recipe to work with since most of my possessions are still in boxes at Jeremy's place.) The mixture was much too dry. So, rather than adding more butter, I added a bit of yogurt and then finished it off by adding milk. I kneaded it just a couple of times to bring the dough together, then cut it and baked it. 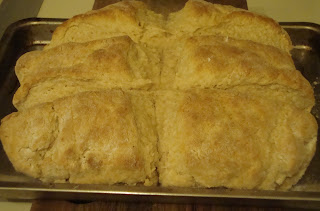 And boy, were those some gorgeous biscuits! Huge, thick, rustic-looking, warm, fragrant ... just perfection ... :) This recipe will definitely have encores with lots of applause.

So then everything was ready to serve. I split open a biscuit, poured some gravy over it, and ... it was okay. Can't say it was good, can't say it was bad. Tom said, when he first tried the gravy as it was warming up: "It's passable!" Hmmmm ... not much of an endorsement, especially from a former vegetarian and vegan.

But lo and behold, as I picked at the biscuit and simply didn't finish dinner, Tom ate two helpings. And he took the leftover gravy home, happy to get another couple of meals out of it. So there!

If I had been served this version of biscuits 'n' gravy at someone else's home, I'm sure I would have eaten it readily. I just couldn't really bring myself to eat it here, where I knew what was in it and the difference between this and the classic original was fairly apparent.

If you're a vegetarian you'll probably love this dish. If you're being put on a low-fat or low-cholesterol diet, you could eat this and not miss the beloved traditional version too much. But I can't give it a 100% wholehearted endorsement, although it certainly was a fun and entertaining experiment.

Whichever version of this classic dish you choose to make, just be sure you celebrate today, okay???

In a large frying pan, brown the sausage, breaking it up into crumbles. Add the onion and red pepper flakes; cook for 2 minutes. Add the water, continuing to break up the sausage. Stir in the flour, then slowly add 2 cups milk; stir until it turns into gravy. Add the Worcestershire sauce, Tabasco, salt and mustard; refrigerate overnight.

Reheat the gravy over medium heat, slowly stirring in the rest of the milk, until bubbly.

In a large bowl, combine the flours, baking powder and salt. Using your fingers, blend the butter into the flour. 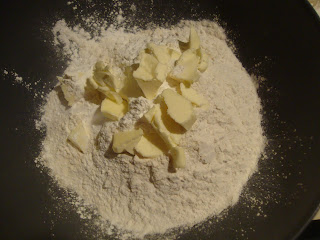 Stir in the yogurt, then mix in the milk to form a dough. 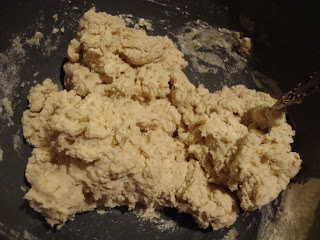 Turn out onto a floured countertop and press into a rectangle about 8" square. Cut into 9 biscuits -- don't twist the biscuit cutter or knife, but rather just make a forceful cut down and then quickly up; this helps the biscuits to rise better.

Place the dough onto the baking sheet and bake for 20 minutes until nicely browned.

Split a biscuit, pour some gravy over it, and serve hot.

Oh, you know my weakness. LOVE me some country style biscuits and gravy. I have never tried that vegetarian sausage, but it looks really good. Maybe I will have to pick some up when we are back in the states.

What a brave woman you are! And I can't believe I've been missing out on all these holidays! Sounds like a good endorsement from Tom after all, since no one forced him to eat the second helping. :-) The biscuits look amazing!

I can't believe with a lover of biscuits and gravy in my house that I did not realize today was the national day!! I just told Chris, and he's on his was to your house... especially cause I told him you even made homemade biscuits!!! DELICIOUS!!!

OK, you will have to check out my related post when it is up--I have a couple of tricks to the vegetarian gravy thing. Your biscuits look most awesome.

Following from the Blog Hop. This recipe looks awesome!

These sound wonderful. I'm following from the Blog Hop =)

I still can't get over the fact that there is a "National Biscuits and Gravy day!" Seriously????

My husband will love this information - he is a B&G fan, and will be thrilled to know there is a day in it's honor!

Huh. I make vegetarian biscuits and gravy all the time but never thought to use fake sausage, probably because I don't usually have any on hand. I just think of milk gravy as a savory pudding and flavor it with nutritional yeast, a little chili powder, and fried shallots or onion powder. A little vegetarian bouillon doesn't hurt either. I eat meat now, but I actually still prefer my vegetarian gravy to the meat-based ones I've tried. Recipe here: http://soursaltybittersweet.com/content/buttermilk-biscuits-and-vegetarian-gravy

Now following you from the Monday Morning Blog Hop. Would love a follow back: http://meetmarkmakeup.blogspot.com

How do you know about all of these food holidays? Would turkey sausage work in this recipe?

I love, love, love biscuits with gravy and fake sausage. Something about it brings me home (I'm from Texas, it' a pretty standard dish there). You've made me crave it...again :). Miriam@Meatless Meals For Meat Eaters

I love biscuits with butter (all melted into a warm biscuit) and strawberry jam but I am just too Yankee to get the sausage gravy thing! Hubby (a Texan) likes it though!

Is there more than one "Tom" in your life or are you guys spending time together again? I'm just mildly confused! And hoping you're happy!

Guess I missed National Biscuits 'n Gravy Day! But seriously, isn't being a vegetarian, kosher "Food Floozie" just a tad oxymoronic? Good try on this one though.

Oh, it's definitely not only an oxymoron, but a bit of a crimp in my style! But I'm staying at the home of a friend who keeps kosher and is a vegetarian, and I have to respect that; so I cook according to the rules here, then cook/eat whatever I want when I'm out and about ... :)