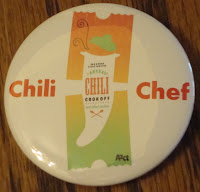 Several weeks ago, I received a fabulous email from a representative of the Ann Arbor Civic Theatre; she was inviting me to participate in this past Sunday's second annual Chili Cook-Off, Beer Tasting and Silent Auction fundraiser by saying, "We have to have some Floozie chili again!" She'd remembered me from last year's event ... awww. Of course, when you decorate your table with bright pink feathers and wear a tiara, I guess you tend to stand out!

Well, how could I resist a personal request for such a good cause??? 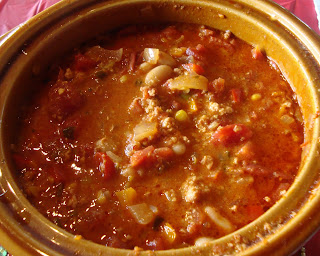 So Tom and I shopped and chopped and stirred and tasted and tweaked, and a beautiful pot of chili was born on Saturday, in order to let the flavors really develop before Sunday's event. It smelled absolutely, deliriously amazing! And while it wasn't painfully spicy, it had enough of a presence that the flavors did a little dance around our mouths and our tongues as they left a distinct tingling. We were very, very pleased at our success!

Of course, this not being the sort of fundraiser where women lose circulation in their legs from pantyhose while men are strangled by bow ties, we had to go find decorations for my table. And that's where Fantasy Attic, a costume shop that is a local institution, came in. 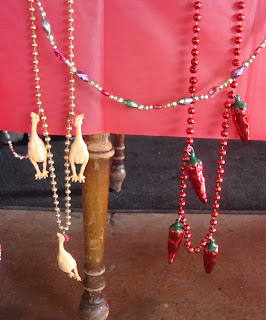 Tom had the notion that a chicken chili required the watchful eye of a rubber chicken; alas -- while we did find one there! -- it was $10 ... not a lot on general principle, but a lot for a one-day event. (It's not like the little guy would be particularly appropriate sitting on my desk at work, after all ....) So we aimed for the $2.50 Mardi Gras beads with little plastic replicas instead. Toss in one bright and festive set of beads with chili peppers, too, and we had our decor!

And so on Sunday we schlepped on down to the Corner Brewery for the event, and were given such a warm welcome! Several of the folks affiliated with the Theatre remembered me, and they even told me that my table from last year was available if I wanted it. Of course, I did! It was a perfect location, first one you'd see when naturally looking from left to right.

I was happily surprised to see a friend I know through work, Sam, who had taken a traditional Jewish cholent ([CHOH-luhnt] = stew) and tweaked it with some seasonings to make it into an excellent chili. I recognized a couple of competitors from last year, as well; all together, there were 18 different varieties entered into the ring, with names such as "D.O.A.," "High Flyin' Chili," and even "Road Kill Chili" ... we won't ask for the ingredient list on that one! 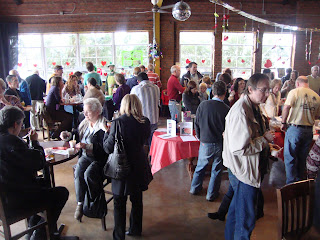 The event also had a silent auction, with a wide assortment of fabulous prizes like 6 months worth of chocolate, restaurant gift certificates, a walk-on role in the Theatre company's production of "Sweeney Todd," a pearl pendant, and even -- oh, bestill my baseball-loving heart! -- tickets to see the Yankees play the Tigers at Comerica Park in May. There was a beer tasting, too, which is going to be virtually ignored here because I rarely drink, and it's literally been decades since I drank beer. Wine or prissy drinks with umbrellas, please, but no beer for me.

Anyway, on with the show!

I am thrilled to say that I was the first one of the bunch to run out of chili, even though I'd brought a full crockpot as well as a stockpot with more. I had people say "I was told I had to try this" or "My friend recommended yours and said I had to taste it." One couple told me they'd read about my chili on AnnArbor.com -- my article, I hope! There was even one fabulous woman who stopped by for a sample, who then brought her husband over for a sample, who then came by one last time saying this taste was all hers: "I'm not sharing!"

I'm also proud to say that Ingrid Sheldon, former mayor of Ann Arbor, had the honor of being my very last chili taster; she literally took her plastic spoon and scraped up the one lone remaining bean from the bottom of the crockpot, because that's all that was left by the time she stopped by to visit me.

An added twist -- in addition to the three judges who were in the back, tasting away in an effort to award prizes -- was that each contestant had a jar for collecting $1 donations; the one with the most money would win the "People's Choice Award." I was tickled to see one man slip a $5 bill into my jar ... good thing I'm already spoken for, huh??? That might have swayed me, if I were a lesser woman!

Now, as though all of this excitement weren't enough, here was the BIG news: I was absolutely giddy to have had Ann Pearlman, fellow Michigander (Michigoose???) and author of The Christmas Cookie Club -- a book I'd just read and loved at Christmastime, no less! -- stop by to visit me. She's a Pulitzer Prize and National Book Award nominee, and she told me that a sequel to the Cookie Club book is due out in October, with further adventures from our favorite women ... yay!!!

I wish I'd had enough presence of mind, in the midst of my happy surprise, to have asked her for an interview ... oh, what fun we'd have had talking about food and life! Because Ann told me that her kitchen philosophy is the same as mine: the cooking, preparing, and eating of food is all about creating memories and sharing traditions and building cherished relationships through these bonding experiences.

Well, it was finally time to award the prizes -- 1st Place, 2nd Place, Most Authentic, and Most Creative. I'm sorry to say that I didn't win anything ... :(

I was kinda maybe thinking I'd win the "People's Choice;" but truly, seeing people smile, hearing their compliments, and watching them come back for more and bring their friends over ... well, that was priceless! That I got a great story to tell on a windy February day while supporting a great cause -- even better! And that I had both Tom and my BFF Wendy there, supporting me, running for chili samples (so we could taste the competition!) and enjoying themselves ... well, that was fabulous, too!!! So I really did win where it counted, I have to admit ... :)

So now, on to the chili recipe!

It looks like there's an overwhelming amount of stuff in this chili, but it's really not too bad. Some chopping, some emptying of cans, some stirring, and then just let it simmer away and work its magic! Truly, it's a thing of beauty once it's all simmered together .... 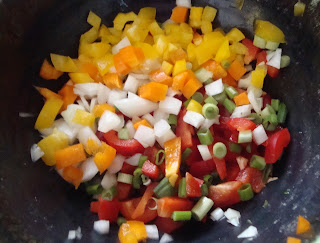 Add the cheeses and cook for at least 1 hour, stirring frequently. If you can make this a day ahead and warm it up, it'd be even better! 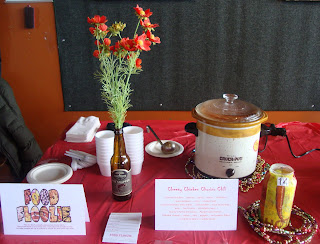 Lauren | Have Fork Will Eat said...

That chili sounds amazing. I'm not surprised it was popular!

Oh the chili sounds fantastic Mary! I'm sorry you didn't win.. big bummer! But you do have the right attitude (as always!) ... you did make a lot of people happy that day!! What a great way to spend the afternoon!

What a fun day. Your recipe not only sounds delicious but the colors are beautiful.

I would never have thought about using a cholent as a base. Very neat.

This must have been so much fun! And to taste so many concoctions? Wow! I kept scrolling between your photo of your chili and the list of ingredients and decided it would be worth an afternoon in the kitchen, perhaps with some blues in the background. Thanks for taking us along, Mary, and for sharing your secret recipe.

hi mary!
this chilli looks delish!! will have to give it a try. stopping by to say "hi" on this sunny day!
*waving,
shelley :)

Hi. Visiting from the Relax and Make Friends Blog Hop. I am your newest follower. I look forward to reading your blog. Please stop by and visit mine.
http://giftsbyamotherstouch.blogspot.com/
Thanks.

i am a new follower. hope you can follow me back.

Thanks so much for dropping by the Be-Bop-A Blog Hop! I'm a follower and I hope you'll stop by again soon! Have a great day! :)

What a wonderful idea to combine chicken and chorizo in a chili! It looks sooooooo good. We are huge chili fans in this house so I know this would be a winner. Thanks for sharing your fun day with us and another ah-mazing recipe!

Hi! I’m your newest follower. Please stop by and follow back when you have a chance. Have a Sweet Week.
http://www.AMommysSweetBlogDesign.com
http://www.MommysReviewsandGiveaways.com

I found you on the blog hop and now Im following you! Please check out my blog and follow me, http://toesthattwinkle.blogspot.com/ I also wanted to say how much I love your blog and reading the posts!

Sorry you didn't win but sounds like people loved your chili! Go you for even entering the contest! I sooo need to do that at least once. I can't wait to try to make this, I enjoy chorizo :)