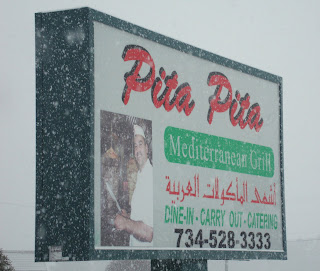 On a very snowy Saturday, Tom and I ran some errands and then determined that it was time for lunch. Choices, choices ... burgers? eat at home? Nah -- let's go out, split something simple and tasty, something we were having cravings for.

So we headed to Pita Pita, already knowing what we were going to order -- how often does THAT happen??? (In retrospect, I suppose I should've warned you that was coming. At least you were probably sitting down already, so you wouldn't collapse from the shock!) 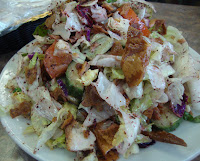 I love salads of all sorts, but if I had to pick only one favorite it would have to be fattoush: a Middle Eastern specialty with lettuce, tomatoes, cucumbers, and small pieces of toasted pita bread. Those are all fairly standard ingredients, I admit. So why does fattoush have such a special place in my heart? The dressing.

The dressing is slightly sour; it can be made with vinegar, lemon juice or a combination thereof. And it includes ground sumac, which comes from a non-poisonous decorative plant. Its flavor, too, is slightly tart; and the salad just isn't the same without it -- I've tried, and then surrendered and bought some of the spice at an Arab market here in town so that my homemade versions would be authentic and taste the way they should. We ordered a medium-sized salad, which could have served a family of 4 for dinner -- it was tremendously generous!

Tom is a huge fan of sandwiches, all varieties; but one of his most beloved favorites is Chicken Shawarma. We've tried them at three different places now; the one at Pita Pita has been Tom's long-time #1 choice, the one the others have to beat. It's huge, and absolutely stuffed with chicken and other goodies in the pita wrap. There are pickles, tomatoes, and a garlic sauce that is fragrant and flavorful, but not so drippy that it makes a mess when you bite into your lunch. Half of a sandwich was the perfect portion, especially with the fattoush to accompany it.

We couldn't even finish the salad, so we boxed it up and took it home with some extra pita bread on the side. Our waitress asked if we wanted dessert -- and I am sorely tempted when someone offers me baklava! -- but we just couldn't do it.

Maybe on another trip to Pita Pita ... but then, the same foods will be calling and we likely still won't have room for sweets afterwards ....
Posted by Yenta Mary at 6:00 AM

Oh yum!! I wish there was a Pita Pita here!! I love chicken shawarma too.. I'd have to get that sandwich!!!

I have an ongoing craving for all things that come from a pita place :) Both of the dishes you ordered sound amazing!!!! I think I'm gonna have to go get a gyro for lunch today, thanks Mary LOL :)

Pita Pita sounds yummy yummy! I'm getting a little jealous of all the options you have for dining, Mary! I'd like to be able to make the fattoush at home. I suppose that the sumac that grows wild here is not the variety to serve to anyone, at least not friends. ;-)

Hi!
I am your newest follower from the social parade.
I would love a follow back.
http://www.thechattymommy.com
I love the title of your blog!!!!

I didn't know you could ingest Sumac?! As usual, you have made me hungry. When can I come eat with you?

I am a new follower from the social parade.
I hope you follow back! ♥