Because I Value My Kneecaps .... 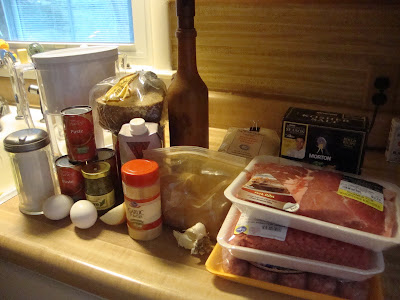 Kneecaps are precious things, connecting the thigh to the shin and helping us to stand or to walk. When we bump them, they hurt terribly; they need to be protected.

And so, because I value my kneecaps so greatly, I am going to show you my weekend labor of love, some of which will be served this week and some of which will wait patiently in the freezer for a cold, icy night in February, perhaps, when its comfort will be most welcomed -- a Sicilian pasta sauce that takes hours to slowly simmer and transform itself into a thing of true beauty. But I am not going to share the recipe, because I have been instructed not to.

The recipe comes from a man with reputed Mafia connections, from whom I seem to have six degrees of separation through my ex-husband. And if a Mafioso shared a recipe with me and gave me strict instructions not to then blab it to anyone else, I am not going to put my little scrawny kneecaps at risk by violating that dictum!

But I must tell you that this sauce is a work of art ... as is the legend that accompanies it.

Our Mafioso -- Pete -- says that his beloved grandmother sailed to this country in the early 20th century. Her boat sank close to shore, and she was able to salvage only two priceless things: a family heirloom ruby ring ... and her own grandmother's recipe for pasta sauce.

The recipe has been handed down through the generations, and is supposedly now 250 years old (with modern adaptations incorporated). And when Pete found out how much I like to cook, that I'd studied Italian for a year, and that I love to acquire old family recipes, he very generously passed along his family's cherished treasure ... along with instructions that I was to take pictures when I first made it, so he could see how I'd done.

Now, this is a serious piece of work, this pasta sauce! The instructions call, first of all, for a 16-quart stockpot. I haven't got one, despite having a fairly well-equipped kitchen; mine is only 8 quarts, so I halve the recipe.

It also calls for numerous varieties of tomato products, lots of cheese, and three kinds of meat: meatballs, pork ribs and Italian sausage links. And there are instructions about how to form the meatballs properly -- in this country, we compact them into rocks rather than making them tender.

So, here's how it's done: Soak a slice of bread in water, then squeeze out the excess and add the bread to your meatball mixture. Then simply grab a handful of the mixture, scrape off the excess that isn't in your fist, and lightly form a ball-ish shape before browning the meatballs and then adding them to your sauce for a slow simmer. I can't tell you any more, but I hope you've learned something from this mini tutorial.

Also, note: "DO NOT DRINK WINE WHILE COOKING -- IT AFFECTS YOUR TASTE!" And, just as importantly: "DO NOT USE OREGANO! Sicilians do not use oregano in sauces; they use it on pizza, salad dressing, fish, etc."

I first made the sauce 4 years ago, following each instruction as though Pete and his fellas were in the kitchen with me, supervising. I took pictures of the entire process and the finished product, which Jeremy and I nearly swooned over because it was indescribably amazing!

I anxiously awaited a verdict from Pete, nervous because some of the meatballs had fallen apart ... but that was apparently the defining characteristic proving I'd done it properly -- the meatballs were so tender that some of them simply disintegrated, as they were supposed to (but which I hadn't known while I cooked). Whew!

So, here is a pictorial of how I made the sauce, starting with the ingredients pictured above and the various steps I completed below ... it's all I've got for you, even though I know this isn't fair! I'm normally vehemently opposed to the notion of secret recipes; but I kinda need my kneecaps, so this one has to stay "in the family," as it were .... 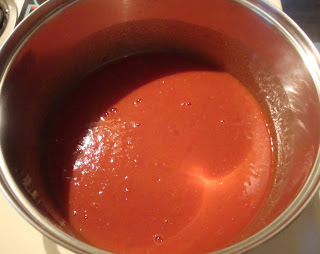 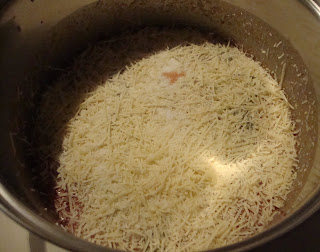 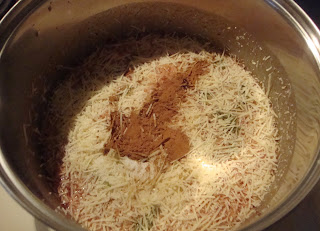 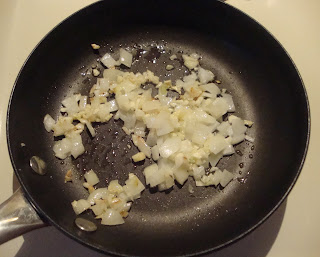 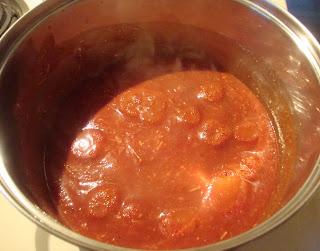 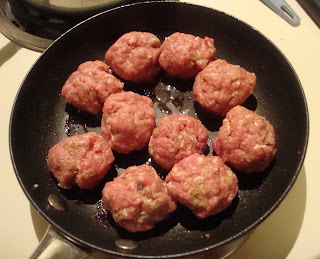 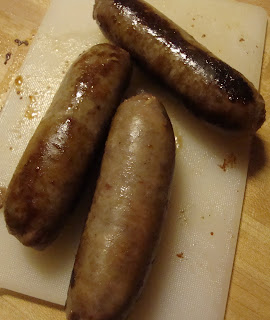 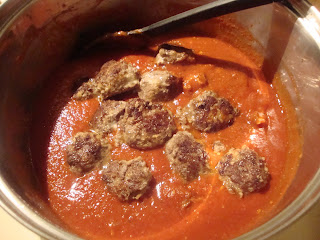 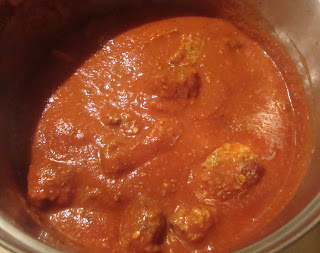 All good Sicilian sauces have tons of meat in them! I love that :) My grandma used to make her Italian mother in law's gravy....very similar to this. YUM!!!

Oh Mary, the things you do for us, your readers. I'm thinking you came a little too close to sharing, so I'd keep the doors locked and the shades down if I were you. When I got to the third paragraph, I laughed when I realized the connection between the title and your post. The sauce sounded fantastic, but please don't jeopardize your safety, Friend. :-)

I hope he doesn't know about this blog. I am afraid you might have already said too much! Your knees are more important than the rest of us trying to work out some sort of sauce. You are such a MOM!

I have to go make dinner now.

Have a wonderful weekend,
Candace

I hope your kneecaps are safe.

That looks so freakin' amazing. Good idea to keep it a secret :-)