The Comfort of Vegetable Lo Mein 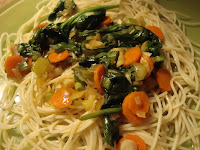 I was sick last Tuesday, so I stayed home from work coughing and napping and napping and coughing; then I had pre-scheduled Wednesday off because it was my birthday. (Although I coughed a bit, I did feel infinitely better for my celebration after resting the day before and sparing my co-workers any further exposure to cooties.)

So, since my new glasses -- 2 pair, so now I have a back-up -- had come in on Monday night, Thursday was the first time I'd worn them to work. 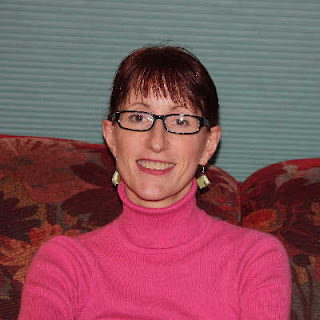 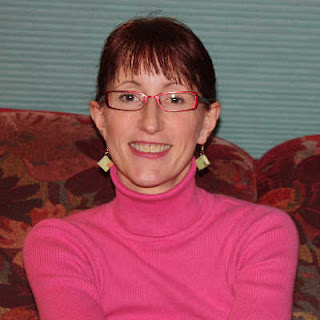 The prescription is stronger -- much stronger. And I've got progressive tri-focal lenses, which I'd had in my last pair; so I was used to the concept, but have been learning where my eyes and head should be positioned when I look through the new specs.

So, given that I'd been at home for 2 days doing nothing but eating and sleeping and typing and talking and coughing, I hadn't given a proper challenge yet to my notorious motion sickness. My head had been pretty stable with those reasonably sedentary activities, with everything I might have had to focus upon resting comfortably within a 2' radius. And so, though I was still a little fuzzy in ye olde vision department as I adjusted, I was doing okay.

And then on Thursday I went back to work.

I am embarrassed to say that I've gotten sick in cars, on school buses during field trips, and even -- God help me, it's true! -- on a swing once when I was little. And it was only because Tom came to pick me up at 1 p.m. on Thursday afternoon that I didn't manage to get sick at work. 'Twas close, I have to admit!

Things started badly almost from the beginning as I looked down a long hallway and couldn't focus on the end of it. My head wobbled as I looked across the main office to talk to my co-workers, hoping I'd find the right niche and suddenly be amazed by clarity ... but not having any success.

I bent down to the left to reach under my desk and turn on my computer, then turned right to check my voicemail. I swung to the center to look at the monitor (and it's a wide screen, which only complicated matters), and felt like a bobblehead trying to find the right fraction of lens to peer through in order to make anything legible.

I pulled the monitor closer to me, then enlarged the text size. The doorbell rang and I instinctively swung to the right to answer the intercom. I had to make up an email group, which consisted of following a chart to find the necessary names and then pulling my head up to look at the screen, then peering down again, and .... You're getting the idea. Back, forth, up, down, left, right ... and no ability to focus on any of it because I couldn't figure out how to tilt my head in each moment as I moved in familiar ways while wearing unfamiliar glasses.

So I became queasier and queasier, until I finally had to go home. I accomplished everything that had to be done that day, but barely. I went home, sucked on some ginger candies, and took a nap. And I was still a tad shaky 'round dinnertime, but dinner was a necessity since I'd had no lunch.

And so, a simple and benign meal was concocted -- Tom chopped a beautiful array of vegetables; I stood at the stove focused (both mentally and visually) on one thing, the skillet. That I could do.

We had leftover angel hair pasta which was transformed from Italian cuisine to pseudo-Asian. I drizzled a bit of sesame oil into the pan, then added a dollop of chili sauce, a generous splash of teriyaki sauce, and a dribble of rice vinegar. 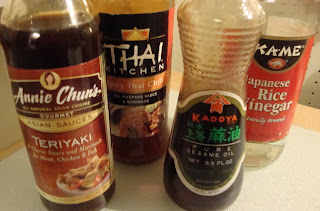 I sauteed the vegetables, plopped them on top of the reheated noodles, and a nutritious dinner was ready within about 5 minutes. And with a bit of sustenance in me, I felt better ... :)

Pour boiling water over the pasta to reheat it; set aside to soak while cooking the vegetables.

Heat the oil in a 10" skillet over medium heat. Add the chili sauce, teriyaki sauce, and vinegar. Add the carrot and the onion, and saute for 1-2 minutes until the carrot softens. 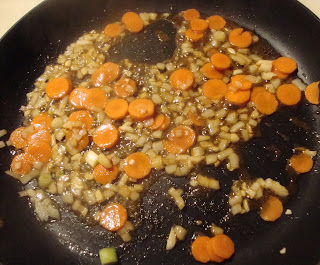 Add a splash of water to thin the sauce a bit. Add the scallions and the spinach and cook just until the spinach is wilted. 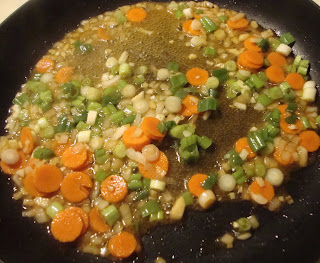 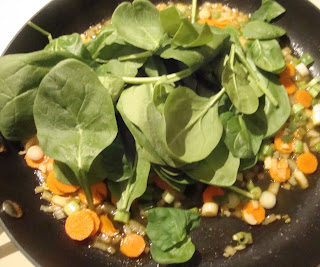 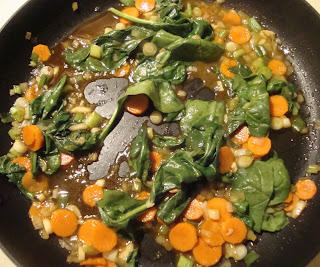 Pour the vegetables and sauce over the pasta, and serve immediately.

My goodness, what a time your having trying to adjust to your new glasses. I will be getting bi-focals for the first time soon, and I'm worried about adjusting to them... It does get better over time, right?

I picked your red glasses, I think they match your coloring well.

It's never fun when you are sick.. glad you are starting to feel better...and the lo mein looks wonderful!

Sorry you are not feeling well. Love the red glasses. The dish looks delish!

Poor dear, I hope the adjustment is getting easier for you. Even though I like both of your glasses (very becoming), I think I'm going with the red. They seem to match your personality. The lo-mein looks delicious.

Your angel hair renovation sounds and looks good. Glad you're perking up after not feeling well. As for the glasses, both are cute, but I didn't want to vote beCAUSE I think it would depend upon what you're wearing and whether you're feeling like you're in a red mood or a black mood. (Makes sense to me, anyway) Both are cute, and I love the style - coincidentally, the shape a bit like mine. :-)

Sorry you were so sick, that's the worst! I love both pairs of glasses, they look great on you! The lo mein sounds yummy, I'm a lover of anything soy & teriyaki flavored so there's a LOT to love about this dish for me :) Feel better Mary!

I'm happy you are feeling better. This lo mein looks great. I am going to have to make this sometime soon. I literally crave Asian food. Both pairs of glasses look great! I can't choose my favorite.

Have a wonderful Tuesday!
Candace

The red ones! And thanks for posting this recipe. Lo Mein is one of my favorite take-out foods and one of the only ones I haven't tried to make yet!

Being sick is the least fun of daily life but sometimes a necessity....Glad you are feeling better and the Lo Mein looks great!! Thanks for sharing with the Hearth and Soul hop!

I love experimental cooking! The hubs, not so much. Thanks for stopping by and leaving a comment! That's one more can in my cans for comments drive. :)

Don't you just hate changing prescriptions. I am putting it off as long as possible. I love the red glasses, they have such character. The recipe also looks wonderful.
Have a fabulous day!

Oh man, double whammie - definitely calls for some comfort food. I get horrible motion sickness, too, always have to feel guilty about requesting the front seat on car trips, etc. The noodles look great, thanks for sharing with the Hearth and Soul hop. Happy birthday, and I vote red.

I voted for the red ones, but I am sorry you are having such a tough time finding the focus point in them. I suppose that eventually it will be no big thing. Until then... egads. Good thing you had an easy to pull together dinner! Looked good, too.

So glad it is going better for you, nothing worse than that feeling that the eyes just don't work right. The Lo Mein? Sounds great! Oh and the black frames are very serious, you can save them for those days when serious is in order.....

Hi, i just want to say hello to the community

I like both^^ Although I would usually go for the black ones...but I always go for black, so that doesn't mean that much xD