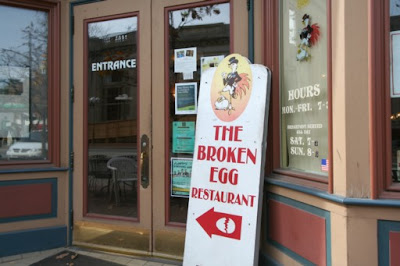 Tom and I corresponded for a long time before we finally met each other face-to-face; he first contacted me on November 20 of last year, after some intervention from our guardian angel -- his sister Anne. But we didn't officially meet until after Christmas, several weeks later. We had breakfast at The Broken Egg, a comfort-food breakfast/lunch restaurant of supreme excellence, on December 26, 2009 ... which means that this past Sunday was the first anniversary of our first date.

So, of course, we went back to The Broken Egg for breakfast! 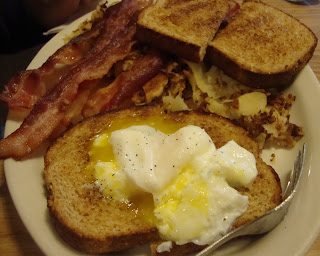 Neither of us could decide what to eat last year, and ultimately went to opposite extremes: Tom ordered a huge plate of bacon, poached eggs, toast and fried potatoes which was too enormous to finish, and I ordered oatmeal with fat, juicy raisins after he mentioned it as we perused the menu and it just sounded good.

The menu is extensive, God help me, with everything from standard pancakes and waffles to 4-egg omelettes and specialty items. Sunday's features ranged from Elvis French Toast (the famous peanut butter and banana sandwich immersed in custard and fried 'til golden) to the Devil's Breakfast (eggs and vegetables with spicy chorizo and jalapenos). What is an indecisive girl like me to do???

Tom indulged in a repeat performance of last year's feast, as I debated the merits of the Peruvian Breakfast Stew featuring chicken and green olives. But knowing that the portions are huge, I vetoed this excellent-sounding dish; I can't bring fleishig ([FLAY-shig] = flesh, literally) to work because of Jewish dietary laws and the potential mixing of meat and dairy. Therefore the inevitable leftovers would have to stay at home, and we still had plenty of cinnamon rolls and fish pâté and deviled eggs and roast beast and potatoes and gravy and cookies and candies from Christmas. We didn't need to contribute further to that cause. 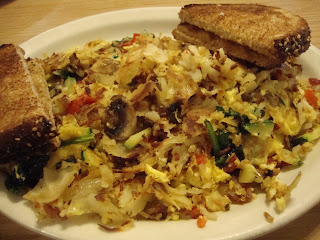 So I chose the Vegetarian Breakfast Stew, which isn't really a "stew" (but that doesn't matter because it's delicious): scrambled eggs sauteed with red peppers, zucchini, mushrooms, spinach, sweet caramelized onions, and hash browns. Oh, and both meals came with multi-grain toast, because stingy portions are not something The Broken Egg offers!

Tom ate everything but a few of his potatoes and the fattiest parts of the bacon (he's very conscientious about such things, always checking fat and sodium and sugar contents while I'm shoving anything into my mouth that tastes good!). I, on the other hand, despite a truly noble effort -- and anyone who knows me knows I'm an excellent eater who can consume far more than most people believe I can -- still had enough of the stew staring back at me to provide lunch for the next two days ... and we all know, I don't do stingy portions either!

So, here's to the first of many anniversaries, and to Tom's and my 2nd Annual December 26th Breakfast at The Broken Egg ... :)

Great looking breakfast. Haappy Anniversary Yenta Mary. Day to remember. Thanks for visiting my blog. Comments are a good reminder to get back and see what others are up to..
Blessings on your new year as well. Coleen in Ukraine

"The Broken Egg" looks like MY kind of breakfast place!! OMG you have me DYING to try it!

Happy anniversary! I think you made the right choice with the Peruvian Stew. It just looks delicious.

Happy anniversary to you! Sounds like you found yourself a "good egg." lol

I love the look of that vegetarian breakfast stew! YUM!

May I also wish you a Happy Anniversary!! and in the famous words of Lord Peter Wimsey, 'May your shadow never grow bulkier,' despite all this fabulous food!

Happy Anniversary!!! Thanks for sharing your first date with us :) Those breakfasts look incredible!!

Wow! Loved this post. "I don't do stingy portions." You had me laughing by the end.

hi, new to the site, thanks.