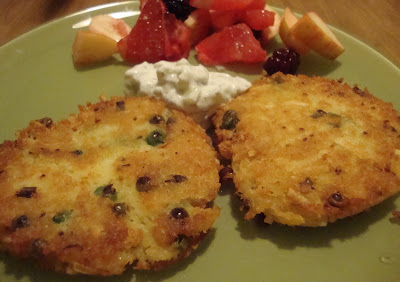 I love latkes -- truly, they are one of my very favorite foods in the universe. Fried potato pancakes -- does it get any better than that??? Sure, I could make and/or eat them any time I want to, just as we could all roast turkey or ham for a Sunday dinner rather than waiting for Thanksgiving or Easter. But it's just not the same, is it, without the specialness of a holiday?

So, on the first night of Chanukkah every year I make latkes. There are eight nights of Chanukkah; and I have to admit that while I light the menorah each evening, I do not always adhere to the theme of celebrating the miracle of the oil when it comes to dinner.

But the first night is different. It's not Chanukkah 'til the house is filled with the fragrance of fried foods and the stovetop is splattered with grease.

There is also a tradition of eating dairy products which -- I was most surprised to find out -- a rabbi I know of wasn't even aware of 'til recently ... hmmmm.

As mentioned yesterday, Chanukkah honors the rededication of the temple in Jerusalem after it was desecrated by the armies of Antiochus IV. The story is told that Judith fed the captain of Antiochus' army cheese, to make him thirsty and encourage him to drink himself into a stupor. Once he fell asleep (or, rather, passed out), she cut off his head; the leaderless army then retreated. So anything made with dairy products is also a perfectly acceptable celebratory food. Macaroni and cheese, cheesecake -- it's all good, as far as I'm concerned ... :)

But last night, it was all about the latkes ... and the gorgeous fruit salad Tom put together while my glasses got all spotted with splattering oil.

And so, here is my incredibly easy recipe for Curried Potato 'n' Pea Latkes with Yogurt-Cucumber Sauce. The house smells amazing as these cook, and you can make them spicier or milder depending upon your tastes. Just my way of taking a traditional food and giving it a bit of a nudge ....

In a mixing bowl, combine the mix, eggs, and water; let rest for 5 minutes. Stir in the hash browns, peas, scallions, curry powder and 1 teaspoon salt.

Heat a generous 1/4" oil in a large frying pan over medium-high heat. Drop latke batter by the 1/4-cupful and flatten each mound a bit. Fry for 4-ish minutes per side, until golden brown. Drain on a paper towel. 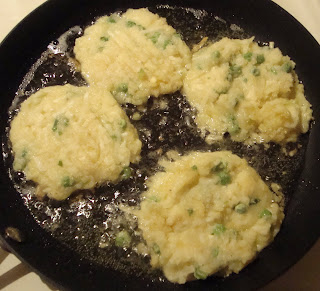 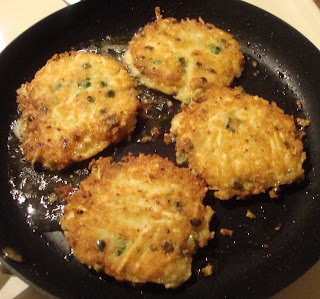 OH, I am so making these. Harrison will love them.

I'm pretty sure I said this yesterday: I love a religion that encourages you to eat fried foods!! I had my first ever experience with latkes about 3 years ago...I fell in love with them! I have never made them myself though, looks like I'm going to have to try it now! Thanks for sharing the recipe.

I have always appreciated the tradtions of Chanukkah and this looks like one I just might try. I knew that it was the celebration on the the oil lasting 8 days but did not realize that meant fried food, yipee! Thanks for stopping by "In His Grip".

This sounds delicious. Do you know, I've never had a latke in my entire life! Thank you so much for posting these traditions. So informative and fun! Happy Chanukkah!

These sound delish! Cant wait to make my latkes tonight :)

these look fantastic! They also look healthier than most and I LOVE that there is no grating involved!

Yum !
Hi, I'm a new follower and would love for you to come on over to my blog
Copper Llama Studio
http://copperllamastudio.blogspot.com/

Two things for you. I tagged you yesterday with an award. I haven't done awards in such a long time, I bet you thought I just quit. No such luck. I am about to do HERE'S TO YOU THURSDAY and I have something for you there, too. You are just sooooo special this week! Well, every week actually, but this week you are getting tagged out.

These look delicious! I love latkes...I love them a little TOO much lol.

Awww potato latkes! I havent tried the real Hannukah latkehs, but I had Korokke, i guess they're pretty much close to it, since its also fried potato pancakes, only Japanese version....