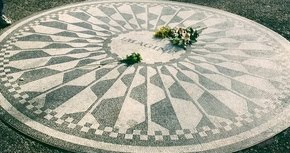 Just as people remember where they were when they learned that President Kennedy had been shot, or how they found out about the tragedies on September 11th, I think everyone also remembers what they were doing when they heard the horrific, incomprehensible news about John Lennon's death.

I was a high school senior, up in my room at my parents' house in the soul-crushingly elitist Detroit suburb of Birmingham, doing despised Calculus homework. I was listening to WABX (a now-defunct radio station) when d.j. Cecile Avalone announced the shooting; it was only a short while later that she came back on the air in near-hysterics, screaming that John had died at Roosevelt Hospital.

I have never known a world without John's presence, as the Beatles formed in 1960 before I was born. We had all their records, and then many of the solo albums -- John's and George's, at least. Personally, I think Paul is greatly overrated; and while Ringo was a necessary element for the band's success, and a great guy by all accounts, his solo work didn't warrant much attention.

While growing up in NYC (born and bred, 'til I was nearly 16), I lived 3 blocks south of John's apartment at The Dakota. When I broke my finger in 8th Grade playing basketball during gym class, I went to Roosevelt Hospital for x-rays and a splint. Our circles never intersected to the point of my ever catching sight of John and Yoko, or of my knowing anyone who knew them. But John had always been at the periphery of my little world, his presence very powerful although invisible.

Until the night of December 8, 1980, that is, when the inconceivable happened on a cold night at the end of a long day and I feel that we then became inextricably linked, however tangentially.

Because John Lennon was murdered on my 18th birthday. And I can now never think of one event without the other.

I've always found that to have been an odd and surreal introduction to adulthood, even though I've never been an obsessive Beatles fan.

Childhood was an innocent land where you listened to music and you bought the comeback album of the world's most famous band's most talented and charismatic member. "Just Like Starting Over" was a huge hit at the time of John's death, and I will readily admit to having been one of the minions who made "Double Fantasy," the album it was featured on, a bestseller.

Adulthood, on the other hand, was an entirely new sphere, where a peace activist could be shot in front of his own home -- a building with significant security systems in place, a virtual fortress if he could only have gotten inside more quickly -- with no warning and no ability to defend himself. It was a world in which Walter Cronkite, on the CBS Evening News Show, devoted 20 minutes of his 30-minute daily summary to the shocking story the next day, even featuring a video of "Imagine" that brought the staid and trustworthy newsman into the MTV generation.

In childhood, I played in Central Park. But when his dad and I took Jeremy to that same neighborhood many years later during a visit to my hometown, we not only saw the merry-go-round and the playground I used to go to, but we went to pay homage at Strawberry Fields, the memorial to John across Central Park West from where he'd lived and died.

I could be making too much of a fuss about this, but it truly was a shocking, life-altering moment. It challenged people's complacency and security, and shattered any delusions of naivete about "living life in peace" (to quote "Imagine"). Here was a man who wrote and sang about "sharing all the world," and who used his enormous influence, charm and ability to attract attention to further efforts to create this Utopia.

And he was taken from his fans, from his music, from his political missions, from his wife and from his very young son in just a moment, leaving so much incomplete.

But as I have now gone 8 years past the age that John died at, I am struck not only by how terribly young he was but also by how much he accomplished in such a ridiculously short lifetime -- particularly lyrics that touched people's souls, ones that are profound both despite and because of their simplicity.

John was a wit and a philosopher, as well as a charmer and even a bit of a scoundrel at times. As he put it himself, he was "a dreamer" ... and he's not the only one. There are so many, many people who devote themselves every day to initiatives that make the world a better place, who engage in tikkun olam [tee-KOON oh-LAHM] = repairing the world.

So, in memory of John Lennon an astounding and mind-boggling 3 decades after he died, engage in tikkun olam today: give an extra couple of dollars to a Salvation Army bell ringer or buy a cup of cocoa for one who's standing in the cold ... donate a bag of dog or cat food to the Humane Society ... bring a plate of cookies to a nursing home or a hospice ... give blood, if you're eligible ... leave an extra generous tip for a waitress or barista ... compliment a co-worker ... leave a note in your children's lunchboxes telling them that you love them, and leave a sweet voicemail for your significant other to show how much he/she is cherished. The possibilities are endless, and don't have to cost anything more than a few seconds of your day. I'm planning to go to the Salvation Army thrift store to donate the last load of post-move items that need to find new homes.

Let radio stations program endless hours of Beatles songs today and play "Imagine" 'til you've heard it far too many times and it's lost its impact. I think a proper tribute to John would be to engage in creating peace with one small step and then another and another, each action creating just a little bit more good will.

Please leave me a comment telling me where you were that night and how you heard the news. And also tell me how you might contribute to "a brotherhood of man" today ... I'd love to know ... :)

I was only 7 when that happened. I can remember my mom and dad talking about it...I can remember hearing it on the news. It did not impact me like it did so many because I was young and had not yet grown to appreciate Lennon. I love that his legend has been kept alive. I love your tribute to him....thank you!

What a crying shame. I hate to admit it but I really don't remember where I was but I do remember being totally consumed by the sadness of his lost and the total disgust of why he was taken. I'm with you as usual, Double Fantasy was and still is one of my favorite albums.

A day that changed the world...

I hate to see such a cloud over your birthday celebration, so 'Happy Birthday Mary!' (and what an interesting but sad post.) So what am I going to do today? Go visit my father in the nursing home and play Christmas carols on the piano for the residents.

This is one of the most beautiful tributes for John Lennon I have ever read....it is poignant and superb.

I was working at The Plain Dealer in Cleveland, Ohio at the time. I got up to get ready for work and was changing radio stations (around 5 or 6am)....I kept wondering why I was hearing so many Beatle songs. I kept telling myself that since "Double Fantasy" was newly released they must have been promoting it.

Wrong...between Beatles songs I heard the horrible, horrible news....I called my sister to be sure it wasn't some type of a hoax. It sadly, wasn't.

I first saw John Lennon when I was 7 and he appeared with the Beatles for the first time on Ed Sullivan. I pointed to the TV and said "I like THAT one"....I never changed my mind...I still "like/love THAT one."

I was always proud that John was a Libra like me (both born in Oct) we both had Venus in Scorpio...he was the most cerebral of the 4 (George was a close second and I agree that Paul is/was HUGELY overrated).

John's depth/wit/sarcasm/genius/musical talent was unlike anyone else's.

I am so sorry this unthinkable event happened on your birthday but how beautiful to share your celebration with acknowledgement of someone who died...waaaaaay before his time.

Much love.....
"and we all shine on, like the moon and the stars and the sun"

I was 8 yrs old. I was sitting at our dining room table doing homework when my mother came out of her bedroom crying. She said, "They killed John Lennon! They shot him!". She cried the rest of that day an well into the next.

At the time, I remember thinking to mself, "Why is my mom crying over some man we don't even know (my dad was thinking the exact same thing, btw), but my mom was a teenager at the very height of Beetlemania, and her childhood idol was now dead.

I'm not one who cries easily, so I don't think I would've had the same reaction she had, but I can understand why she felt the way she did. He was a real-life representation of her youth and all the hopes and dreams that are inherent in that phase of our lives. And just like that, he was gone. A part of her, that care-free, innocent part of her, was gone with him.

It is a shame that one mans insanity cost another man his life. And yet life is like that everyday. One minute we're here, the next minute we're gone.

Treat people with respect, live your life as though it were a gift to be treasured, and do what you can to leave this world a better place before it's your turn to go. You never know when that will be.

@Dania, your comment was sooooo beautiful....it really touched me!!