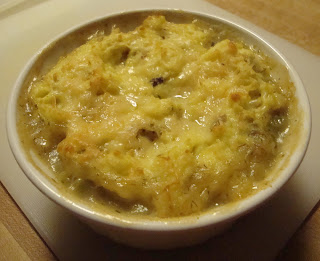 There are people in this universe who don't like leftovers. They don't want to see the same food a second or, God forbid, a third time over. It doesn't matter if the food is transformed -- say, making hash out of roast beef and baked potatoes. They want a completely brand spankin' new meal each time.

I am not one of these people. I do not understand their little quirk.

Because I, for one, adore leftovers; I will even make extra quantities of food simply to insure that there are goodies awaiting me for breakfast, lunch or dinner the next day. Sometimes it's something that is merely reheated, and other times the primary ingredient is re-envisioned into something entirely different. But I think leftovers are a fabulous thing, and I put bunches of 'em to good use on Saturday.

For starters, I had leftover latkes 'cause I'd made a huge batch for the first night of Chanukkah. Tom and I each had a couple for dinner that evening, another couple for breakfast the next day, I brought two for my lunch at work on Friday ... and still, there were two just sitting patiently and hoping that someone would pay attention to them on Saturday morning. Well, who am I to make any poor little latke feel rejected??? Show those babies some love! 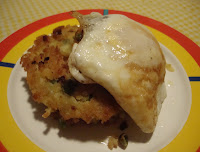 And let me tell ya -- a fried egg, just crispy at the edges but over easy so that the yolk is nice and runny, makes a mighty fine accompaniment to those curried latkes ... yes, indeedy. Served with Green Mountain coffee that was part of a most thoughtful and generous Chanukkah/holiday (or, rather, choliday -- with a good gutteral "ch" at the beginning???) gift package from a beloved friend, it was an exceptional start to my weekend.

Then I moved on to lunch, almost immediately afterwards. My brain is perpetually consumed with what I want to eat, what I'm going to make, what sounds good to try, what I've eaten and enjoyed. So it was only natural that, once breakfast was over, I started getting lunch ready! I had a busy morning planned; getting the meal prepared so that it only needed to be warmed up once I got home was simply careful planning on my part, rather than obsessive behavior.

I still had turkey and garlicky mashed potatoes left over from Thanksgiving; when there's only two adults in the household -- and no 19-year-old son devouring everything in sight anymore, since I moved in with Tom -- it takes awhile to use up the food! I also had a few peas in the freezer, 3 carrots, the last dribble of flour in a bag, half a lemon ... much of it found a home in my Shepherd's Pie.

Though, really, if it doesn't use lamb -- the animal that's actually shepherded -- then can it be called "Shepherd's" Pie ...? It's not Fisherman's Pie, 'cause there's no fish. Farmer's Pie, since turkeys and vegetables come from farms??? Let's just call it what it was: Individual Turkey 'n' Mashed Potato Casseroles. Make this and enjoy!

(Yes, I know that the photo above looks more like onion soup with cheese melted on top than it does a casserole! But trust me -- I can vouch for its true identity.)

Add the salt, pepper, dill and lemon juice. Stir in the onion, carrot, peas and turkey. Divide the gravy among the ramekins. 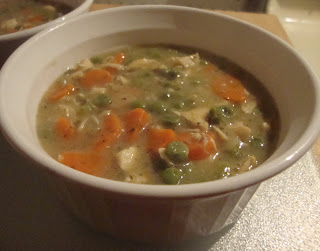 Stir the egg into the mashed potatoes until the mixture is well combined. Spoon the potatoes over the turkey gravy, smoothing a bit; yes, some of the potatoes will start to sink -- that's okay. 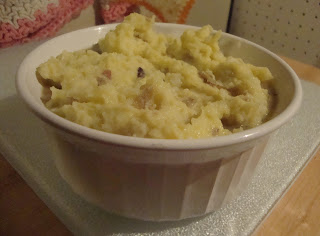 Sprinkle the parmesan over the potatoes.

Place ramekins onto a baking sheet to catch any drips, and bake for 30-35 minutes until the potatoes are nicely golden brown and the gravy is bubbling.

Hi There- I am your newest follower! I would love it if you could stop by and return the love :)

Yum....that's a great way to use up those leftovers. I love the fried egg on the latkes...mmmmm!! I'm particular about my leftovers, some things just aren't good the next day...but I beat that by making sure when I make those things, there are no leftovers :)

Whatever you call it, it looks delicious. I'm a leftover lover too. Not a big breakfast food eater, there is nothing better than a little leftover curry or lasagna waiting for me in the morning. That's not to say that Eggs Benedict don't taste good for lunch or supper. Go figure!

I'm with you on the leftovers. Turkey soup, corn casserole turned into a side dish, turkey and gravy on toast, wraps...etc etc. thrifty is challenging and emotionally rewarding!

Loved the post until I got to the runny yolk part. Then my brain screeched to a halt and my body shuddered. It was a minute before I could pick up and read on. ;-) But I'm with you on the leftovers! When I make chicken pasta, I always make enough to have some the next day. I do that with many meals. But we like leftovers only the next day, so if I have more than that, I put the rest in the freezer and bring it out later as a new item. :-)

Making friends Monday!!! I'm following you now and looking forward to reading more of your posts!

Following now...come on by and give me a visit.

Hi, I like your blog, and hope to see you on mine. I'm your newest followers now. :)
http://the-w-s.blogspot.com/

I always marvel (or am annoyed) by those people too who will not eat leftovers!

I find that to be a trait that is more common in men than women. I have friends whose husbands would never DREAM of touching a leftover. If my husband were like that we wouldn't be married to begin with.

Any good cook worth their "salt" (pun intended) knows that when a food sits a day or two after it is made, it gets BETTER!!!

Thanks for the vote FOR leftovers!

I had fried eggs and latkes for breakfast this am as a matter of fact :) The pot pie looks really good Mary, excellent use of left overs :) I am one of those who don't love the left over but I'd eat this, and be happy about it too!!