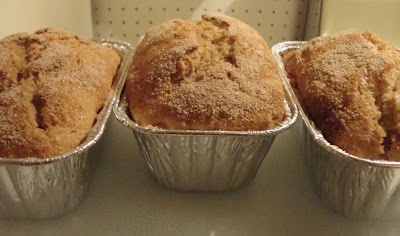 I had some leftover applesauce after serving potato latkes for lunch two Sundays ago, on the 5th day of Chanukkah. Latkes are traditionally served both with sour cream and with applesauce, after all, even though people inevitably prefer one over another (and you'll never get an entire group to agree, so you offer both).

Now, you know me -- nothing goes to waste here: oatmeal becomes cinnamon bread, salmon immerses itself in a mustard-cream sauce to pour over pasta, turkey and mashed potatoes become transformed into a casserole. So I put the applesauce to good use by making mini quick breads to give as Christmas gifts. Ah, the spirit of interfaith cooperation!

This is a non-dairy recipe, because one of my co-workers has a severe dairy allergy. Since I'll be bringing treats to my friends for the holidays, I always want to be sure that I have items that are pareve ([PAHRV] = neither meat nor dairy, a designation within the Jewish dietary laws, a.k.a.: rules for keeping kosher) for him to eat -- he has a sweet tooth even more notorious than my own!

This batter can be made into 1 large loaf or, as I made it, into 3 mini loaves to share the wealth among more people. Sprinkled with cinnamon sugar, they are a most fragrant form of aromatherapy even before you can slice into them!

Divide the batter among the loaf pans (1+ cups batter per loaf pan). Combine the 1/8 teaspoon cinnamon with the 2 tablespoons sugar; sprinkle over the batter. 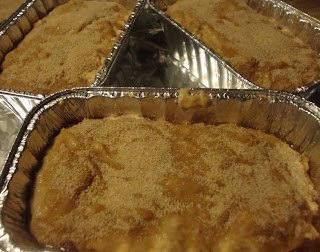 Bake the breads for 30 minutes, until a tester comes out clean.

Ohhhhh... I bet that is wonderfully moist!! And I know it would go good with my coffee right now! I can even smell the cinnamon!!! YUM!

Mary, you never fail to make me hungry! I want to eat at your house. :)

I absolutely love it that you take time to educate us on the Jewish culture and faith as well as sharing your wonderful food. Thank you so much for doing that!

Have a great Wednesday,
Candace

Oh Mary, this sounds delicious, and I am glad you made it without dairy. Both a daughter and her husband are lactose intolerant. I have a question: I canned applesauce in pints with nothing added, so it's just apples. How much cinnamon or sugar or both do you think I should add to a pint before using it for this recipe? Any idea? Can't wait to smell this baking in my oven!

Looks sooooo good--I just pulled a loaf of banana-pecan bread out of the oven. I love it when the weather is cold enough to bake, bake, bake!

My mouth is watering! I just saw your segment on the morning show and

2) congratulations on your time in the spotlight!