In New Orleans, they have Mardi Gras; in Brazil and in Europe, they have Carnival.

And here in Michigan??? We have pączki. 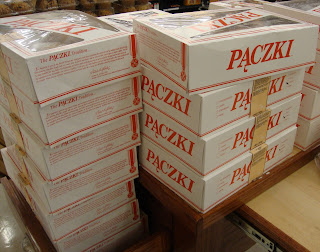 First things first -- it's pronounced POONCH-kee. It's Polish, not some Midwestern nasal twangy thing, so just go with me on this despite the seeming spelling anomaly. And remember that pączki is actually the plural, because no matter how many tons of fat and calories are in 'em, no one -- no one -- eats only one. You've gotta get rid of all those treats before Ash Wednesday, after all!

These may resemble jelly doughnuts but oh, that is such an unfair comparison! Think of a jelly doughnut with a bare minimum of twice as much sugar and eggs and butter, and thus twice as much heft. These are sturdy little things! And they are filled with apple or raspberry or custard, or even -- if you want to be very traditional -- a lovely perfumed rose jelly. 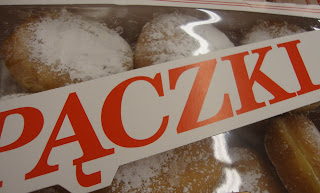 You can buy pączki at the grocery store, but why??? They're simply not as good as those that come from the Polish bakeries in Hamtramck [ham-TRAM-ick], a traditionally Polish (though now fairly mixed) city which is mostly-but-not-entirely surrounded by Detroit.

Every year, the local morning news crews televise long lines outside these shops. People set their alarms and get up extra early to stake a claim to a reasonable spot in a sea of dozens and dozens of others who have the same hope of being first in line (or perhaps 50th, if they're lucky!). Folks buy the treats to eat for breakfast, to share at work, whatever ... who needs an excuse???

There was even a "Countdown to Pączki Day" party in Hamtramck this past Saturday, featuring live music, Polish dancers, a visit from the Detroit Tigers' mascot, and -- oh, the thrill! -- a bus tour (The Pączki Express) to take riders from one bakery to another for ease in purchasing goodies. Pączki Day is a BIG deal here!!!

I have the privilege of enjoying pączki bought at the fabulous Copernicus Deli; they are baked in Hamtramck and then schlepped here to Ann Arbor ... does it get any easier? One of my very dearest friends in the world, Connie (of Pickle Soup fame), works there too, so I even get a quick visit in while I pick up my goodies.

Copernicus is an amazing place that imports all sorts of treats -- from jams to chocolates to cookies to pickles -- from Poland. At the counter, you can find a variety of sausages and pierogi, traditional cabbage dishes and salads. There are spicy mustards and extra rich sour creams, and so many delectable goodies that it's hard not to just buy one of everything while shopping.

But in the chaos of Pączki Day, one only focuses on the sugar. For the record, let me tell you that Copernicus is ordering 10,000 of those luscious, rich, sugary pastries ... 10,000 at one little shop alone!

Because today is Pączki Day. Nothing else matters 'til you get your annual fix ... :)

POONCH-kee? I would have never ever guessed that was how it was pronounced. I always learn something new when I come over to visit you, Mary. I would love to try a pączki. Make mine custard, please. :)

This are one of my most favorite things in life - truly.

Where the heck have these been all my life? YUM!!! Seriously, though, I don't think I have ever seen these before...maybe I need to spend the day finding a Polish bakery!!!

Mary, you introduce me to the most interesting things!! I've never heard of these before, and for sure I wouldn't have known how to pronounce them. Thank you for the pronunciation guide! I think there are mostly Scandinavians around here, but I'm going to look for a little Polish enclave. I need to find paczki.

I'm from Michigan and I've never heard of these! (Ok granted I was 11 when I left MI but still) They sound great! Butter, sugar, eggs, donut like things, how can they be bad? Enjoy yours Mary!

Now following from http://BabyDealsDujour.com/blog
We track all of the baby daily deals in real-time. Would love for you to follow back!

New follower through blog hop. Hope you will visit and follow back at The Blessed Couponer.
http://theblessedcouponer.com

Hello
I'm form Poland. It's very exciting to read that even in US is Pączki Day!!! It's really amazing:)

Hello
I'm from Poland. It's very exciting to read that even in USA is Pączki Day!!! It's really amazing:)Thx you for realize me that
Greetings form Warsaw - POLAND