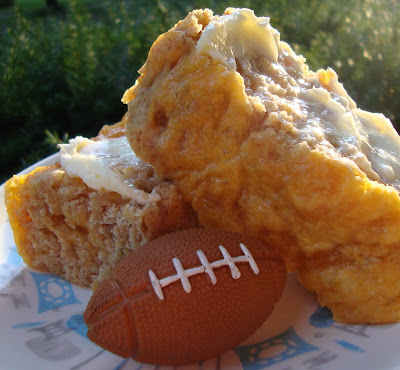 For several years, we've only experienced the desperation of disappointment as the University of Michigan's first game approached. But now, with new coach Brady Hoke, something unfamiliar and exciting is floating in the air: hope.

And hope is a fabulous thing to have, especially when you've got a football tradition as stellar as U of M's! We have expectations of greatness, and once again a feeling that we can have fun watching our team play.

In honor of both the team we're starting our season with - Western Michigan University - and the great city of Kalamazoo that is home to Western, I decided to offer a themed recipe for this weekend's football game: a beer-based quick bread featuring Amber Ale from Kazoo's own Bell's Brewery.

Bell's was founded in 1985, and continually strives to "brew thoughtfully, creatively and artistically."

"Founded by Larry Bell as a home-brewing supply shop in 1983, Bell's Brewery, Inc. sold its first beer in September 1985 .... After struggling several years to produce and sell robust, full-bodied ales against a tide of a mass-market domestic beer, Bell's began to see the demand for craft beer grow dramatically and expanded into new markets. Bell's currently sells beer across an eighteen-state area through a network of over fifty quality wholesalers."

I have to publicly thank Rod, at Plum Market, for his help in picking a beer for this project. I don't drink beer, though it's a fabulous cooking ingredient, so I know virtually nothing about it; but Rod was exceptionally knowledgeable about the assorted specialty beers, and was able to guide me to the perfect option: Amber Ale.

"Amber Ale deftly balances a mixture of toasted grain & light caramel notes with a range of floral, citrus and herbal hop notes, capped by a clean bitterness. This balance of flavors makes Amber Ale quite versatile as a food pairing option, not to mention being rather tasty in its own right. Whether serving as a jumping point to other styles or as a familiar standby, Amber Ale is central to the Bell’s portfolio."

This beer brought a depth to the bread that was an ideal complement to the cheese. Other choices, such as a stout, would have been too strong and too heavy. This beer 'n' cheese bread has hints of sweetness, a twinge of spice, some saltiness ... an entire range of flavors.

So whether you're tailgating at The Big House (so named because it seats over 110,000 fans) or watching at home with family and friends, celebrate the season opener with a bread that also celebrates our fabulous state of Michigan! It's a perfect accompaniment to bratwurst, to chili, to salads ... virtually anything you might be serving to hungry fans.


Beer 'n' Cheese Bread
(based upon a recipe from Cooking Light)

Melt the butter in a small skillet over medium heat; add the onion, garlic, salt, and red pepper flakes, and cook just until the butter is bubbling and the onions are translucent. 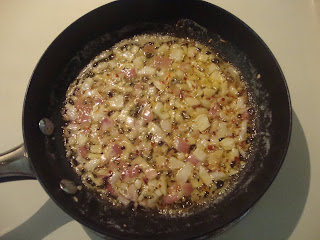 Place the onions into a large mixing bowl, and add the flours and baking powder. Slowly stir in the beer, in increments. 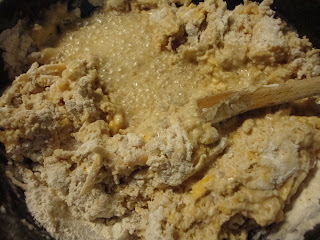 Stir in 3/4 of the cheese, then spread the batter in the prepared pan. Top with the remaining cheese. 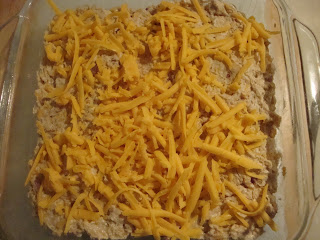 Bake for 30-35 minutes, until a tester inserted into the center comes out clean. Let rest for at least 15 minutes before cutting into squares or slices.

The number of servings will depend upon whether it's served in squares or slices, and how generous each is.
Posted by Yenta Mary at 8:00 AM

Oh how I adore football season!!!! There truly is nothing better then college football Saturdays!!
And the bread... yes, I'll have the whole loaf, thank you!!

I am SO making this tonight for dinner (we're having beans on toast, but beans on this amazing bread will be even better!).

One question: do you think the batter will fit in a nine- or ten-inch cast-iron pan? I'd love to throw the pan in the oven.

I could probably eat the whole pan by myself. It looks delicious! Have a happy and safe long weekend!

Looks so good! Can't wait to try it. I am a new follower. Looking forward to reading more of your posts.

Hope to see you on my blog - Free eBooks Daily. (You can even read ebooks on your computer or smartphone!)
http://www.freeebooksdaily.com

I am totally making this on Sunday!
Check out my blog post for some great beers to try in or alongside the bread. Let me know what you think!
http://lazyacresnorth.com/2011/12/27/session-beers-for-football-parties/