The Saga of the Broken Apple Tart 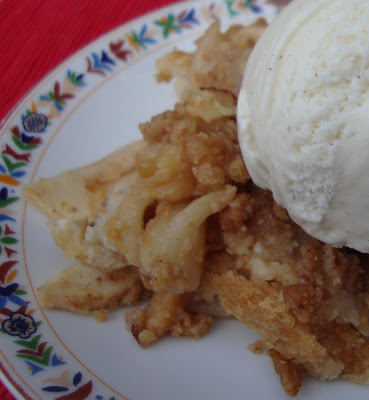 And while there are lots of cobblers and crisps and applesauce in all of our futures after we pick our apples, I thought I might make something a bit more elegant and also use the tart pan I just found again after moving last month.

I made a Caramel Apple Tart ... sigh.

Of course, I have to admit that my cooking venture with the apples didn't start out as a tart; my original plan was to make dairy-free caramel apples for my co-workers, one of whom has a dairy allergy. But the caramel was too hard, and became too brittle to bite into.

So I smashed the caramel off the apples and melted it with a bit more of the non-dairy milk substitute I'd used in making the original batch. I poured the now-liquid mixture into a greased pan, refrigerated it, and hoped to cut it into soft caramels.

But ... the ingredients separated and the greasy butter substitute rose to the top, coating everything in a layer of slime. It was pretty disgusting! (Remember, just 'cause I write about food doesn't mean that everything I make is a success! We all have our trials, our errors, our experiments, our humiliations ....)

So, then, after venting in frustration as my plans had gone so significantly awry, I still had apples to use up.

I contributed some caramel sauce and some leftover streusel topping from a different baking project to the cause, and thus was able to clear some items out of my refrigerator while also redeeming my afternoon of kitchen adventures.

And the tart turned out beautifully - gorgeous, with tender apples coated in sweet caramel.

My ego was restored!

That is, until I tried to slice the tart for its photo op. I just didn't have any "mazal" - luck - with my apple ventures on this particular day. Each time I tried to cut a piece, the back crust crumbled or the bottom crust only came up partially from the pan ... oy! Sometimes it's easier to just go to the grocery store!

But once again, I pulled a proverbial trick out of ye olde hat. I simply scooped up the crust, filling and topping and plopped some onto a serving plate. A never-unwelcome scoop of vanilla bean ice cream, and ... voila!

I present to you an elegant French dessert which will now be known as Tarte Cassée de Pomme [tart cah-SAY deh POHM]: Broken Apple Tart.

Place the pie crust into a false-bottomed tart pan (or a pie dish). Press crust into the bottom of the pan and up the sides; use a knife to trim excess dough.

In a large mixing bowl, combine apple slices and caramel sauce; pour into the crust.

In a small bowl, combine all of the streusel ingredients; sprinkle over the apples.

Place the tart pan onto a larger baking sheet because the caramel sauce seeps a bit, and bake for 50 minutes until top is golden and the apples are tender when pierced with a knife.

Let cool to room temperature, then try to serve it in slices. When it won't cooperate, simply scoop it up, place it on a serving dish, and offer it with ice cream or whipped cream ... and no explanations of what its original incarnation was supposed to be!

This sounds so yummy!!! Great blog!!

Something that went wrong but was a success in the end... that's perfection in my book!!!

That looks delicious, Mary! I have a basket of McIntosh from our tree - sitting on the deck in the rain, just waiting for a good recipe to come along. Thanks.

I'm getting a little weary of the rainy weather. I'm so unmotivated when it's dark and dreary.

When all else fails, vanilla bean ice cream makes everything better. I love the broken apple tart, Mary. I would be breaking my "perfectly sliced piece" up before I added the ice cream anyway so that all of that yummy flavor gets on every bit of apple. It looks delicious!

I had the same thing happen to an apple cake this week. I turned it over while it was still hot, and it fell apart.I kind of "smooshed" one piece together so I could photograh; It still tasted great. I love the almonds, cinnamon and sugar combination with our apple tart. Bet its delicious.

Your apple tart has me drooling. :), Miriam@Meatless Meals For Meat Eaters

Ohmygoodness!!!! This looks so delish (broken pieces, and all)! Any apple would be proud to be part of such a masterpiece! And now, I'm adding all the fixings to my grocery list (does it still fill the daily fruit recommendation when you add the ice cream to it? Just wondering!) so sorry I haven't left many comments lately - I stop by daily, but my creative brain seems so fried that I can't muster up my thoughts! I love the new look - and think of you often, my dear friend. Hugs!)