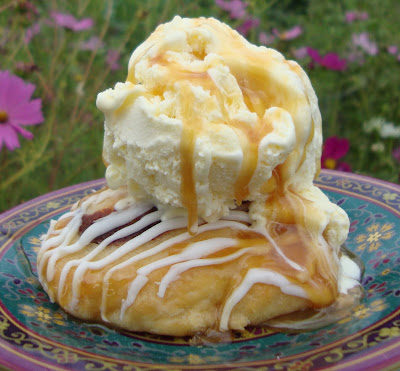 I recently ate at The Avenue, a family restaurant in Royal Oak (a Detroit suburb), which serves good old-fashioned comfort foods: enormous omelettes and other breakfast staples (with such generous portions that there are often 1 or 2 side dishes to provide all the food!), burgers, sandwiches, pasta dishes. There's a tremendous variety, and everything I've eaten there has been very satisfying.

Although I wasn't hungry by the time I'd finished my meal, I still had to peruse the dessert menu and sigh a bit over it. Pies and ice cream desserts were happily offered; but then I saw something a bit different. It was a sundae, but it wasn't just a standard issue one. There was a base, and then it was topped with the requisite sundae makings.

And what, precisely, formed the base of this intriguing dessert?

A cinnamon roll, slightly warmed so that it would transport anyone nearby with its enticing aroma.

Well, I immediately stated to my dining companions that I would have to replicate this thing of beauty that I didn't even order and was still seduced by. And so, the next day, I did!

I took a purchased cinnamon roll, as I wasn't quite motivated enough for my fix to actually wait for yeast dough to rise for a homemade version. A scoop of French vanilla ice cream, a drizzle of caramel sauce ... and each of these simple ingredients worked in perfect harmony with the others.

This is one of those recipes that is fun and festive, but which also can be thrown together incredibly quickly if you're ever in a bind. Everyone will be so impressed by how fabulous it is that they won't care in the slightest that it only requires 3 ingredients and a brief minute of your time to put it together!

Place the cinnamon roll on a dessert plate, and top with the ice cream. Drizzle with caramel, and top with whipped cream if desired.

Serves 1, but can easily be multiplied.
Posted by Yenta Mary at 8:00 AM

This would be like a magnet to my grandkids, Mary! especially with that cinnamon roll slightly warmed. I suspect it would be followed by a long nap. ;-) They may have inherited their grandma's sweet tooth. I still can't go past Culvers without looking to see what the flavor of the day is. :-)

Cinnamon roll sundaes.. why didn't I think of that? YUM!!!

This is just evil! Looks sooo good, and too easy to make. Thanks for sharing. I know my husband is going to love this :)

It does look impressive for such an easy dessert!

omygoodness! I can ONLY imagine how that tastes and it looks so beautiful too! I've got to remember that one. Yum!