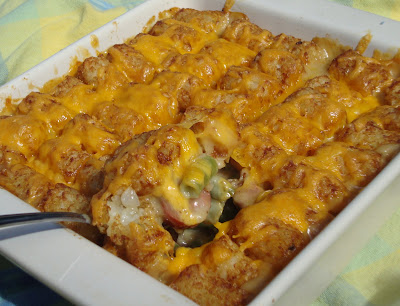 Minnesota is noted for its cold weather and for hardy residents who speak with cute accents. The severe winters don't keep people huddled indoors, though; folks continue to go ice fishing, skating, and socializing.

But after venturing out into the frigidness, a warm meal is warranted. And Minnesotans are famous not just for casseroles, but specifically for what they call "hotdish."

"Hotdish is a variety of baked casserole that typically contains a starch, a meat or other protein, and a canned and/or frozen vegetable, mixed together with canned soup."

In honor of Saturday's game - Minnesota vs. Michigan - I thought I would pay tribute to this culinary tradition. But I was not going to resort to using the infamous condensed soups.

That is, until I read the following:

"Cream of mushroom soup is so ubiquitous in hotdish that it is often referred to in such recipes as 'Lutheran Binder,' referring to hotdish’s position as a staple of Lutheran church cookbooks. The soup is considered a defining ingredient by some commentators."

And so, I realized that I would be dishonoring the very essence of the hotdish if I tried to make it more sophisticated. It is consummate comfort food, and part of its charm is its hominess and ease of preparation.

So I took as my basis the famous green bean casserole, and added a few tweaks to make it an entree rather than a side dish. It's perfect food for a football game, as it's hearty and substantial and ideal for fall.

Hotdish is so integral to Minnesota culture that Sen. Al Franken even welcomed the state's Congressional delegation to participate in a hotdish competition this past January. The winner did not feature another Minnesota product, the lovely wild rice. It didn't feature venison bratwurst, or any other enobling ingredients. Nope - the winner was Sen. Amy Klobuchar, whose Taconite Tater Tot Hot Dish was a combination of ground beef, creamed soups (mushroom and chicken), tater tots, and Pepper Jack cheese.

Hotdish may be lowly, but you know what? Even with its simple ingredients and lack of elegance, it's really, really good! My Hot Dog Hotdish was devoured when I served it, and will be a hit if you serve it for Saturday's game. Jeremy loathes green bean casserole, but he loved this so much that he actually ate more helpings than anyone else!

I was THRILLED to see that this post was found and discussed thoroughly on Serious Eats the other day: "Hotdish Casserole"!!! And I was equally happy to find that everyone had lovely things to say about, and memories of, hotdish ... regardless of whether it's called a casserole or a covered dish or whatever around the country ... :)

Note: Today is the first full day of Rosh Hashanah. My friend Debbie Vanni at The Culinary Cellar very graciously invited me to write a guest post for the holiday. Thank you, Debbie, for the fabulous honor!

So go visit her fabulous site devoted to recipes and cookbooks, and you'll find us celebrating the new year and reviewing the past one while sharing a sweet treat: Apple Almond Kugel. 'Cause it's not a Jewish party without kugel, after all - a traditional creamy noodle pudding with a crunchy, cinnamony topping.

I've baked a lot of kugels over the years, but Jeremy told me that this is "the best one you've ever made!" Pretty high praise ... :)

May you have a sweet new year!

Heat the wieners over medium heat in a medium skillet until lightly browned, about 5 minutes.

Place the tater tots in rows over the green bean mixture. Bake for 25 minutes.

Place the cheese over the tater tots, and bake for another 25 minutes until the cheese has melted and the sauce is bubbling.

Too funny, a bunch of us were just talking about "hotdishes" at work the other day! Love that showcased it here.. especially a hot dog hotdish!! Yum!

This is so funny, because I had a post on Wisconsin Hotdish ready to appear in mid October. lol Yes, 'hotdish' is what it's called in these parts. And kids especially seem to love them. I can't imagine a kid who wouldn't love this one! Yeah, ya betcha! ;-)

This is pure genius! Love it, gonna make it this weekend.

What perfect game food again! Looks so yummy and cheesy. Two of my favorite combos, haha.

I found this through Serious Eats. Hurray! Now I have another use for all the excess cans of French Fried Onions I mistakenly purchased on sale last Thanksgiving.

Hey your Hotdish is a hit!

OK, I'm going for it! What can I substitute the cheddar soup with? It's not available where I live, but I won't let that deter me. Mornay sauce? Something else?

Scrap that, I just found your reply on Serious Eats. Cheese in a jar it is!