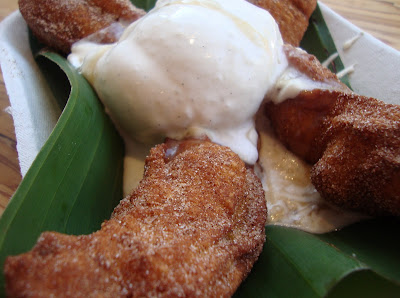 Tom and I had a lovely date night recently, featuring a treat that he declared to be "the best dessert (he's) had in a very long time."

And where did we find this fabulousness to spotlight in today's
Frugal Floozie Friday feature?

At Frita Batidos, a cheerful and casual Cuban-influenced eatery run by famed chef Eve Aronoff whose late, great restaurant eve was the site of one of my very favorite and most memorable meals. 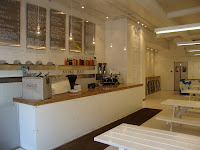 The small but intensely bright white restaurant was nearly empty when we first arrived, though we watched more than a dozen people stream in and fill the space only a few minutes later. We perused the menu, always a complicated matter with so many enticing dishes from sandwiches to salads to sweets.

But we'd already eaten our dinner and had come prepared for dessert. A batido, perhaps, which is a fruit-based milkshake? Rum-soaked pineapple? The highly recommended cinnamon-sugar plantains that Tom had eaten on a previous visit to Frita's?

Nope. All were excellent possibilities, but there was a clear winner among the choices: a churro sundae - fried pastry strips paired with rich ice cream for dunking.

Now, these were not just some plain ol' doughnuts - ha! The churros were still warm from the fryer, fragrant with a generous coating of cinnamon sugar and infused with the scent of orange. They were crisp upon first biting in, followed by a spongy interior cooked to airy perfection. The ice cream was a lovely complement, rich and creamy and perfect to dip the churros in, but the pastries were clearly the star of this show.

At $7, this amazingly luscious dessert clearly falls within the mandatory $5 per person Frugal Floozie Friday budget because the portion is so generous that it would be impossible to finish it without a loved one to share it with. You could really economize and share it among a group of four, but I don't recommend this strategy; then you'd only get one churro per person, and they're too fabulous to settle for such a measly portion!

Oooohh... that looks incredibly good!!! Yet another reason I wish I lived closer to you!!! :)

I absolutely adore churros and paired with ice cream (something I've never had before) they must be absolutely divine. Hope you are enjoying a wonderful weekend!