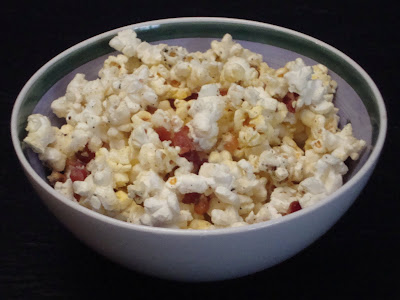 Popcorn is the official state snack food of Illinois. I'm not much of a popcorn fan - I can eat it, but don't really care if I ever do. However, I know I'm in a distinct minority with regard to my lack of affection for this treat.

Michigan will be playing Illinois this Saturday, so it only seemed appropriate to feature popcorn in today's post. But I had to glam it up a bit. I debated whether to make a sweet or savory version, or whether to make cute little football-shaped popcorn balls.

And then I had an epiphany.

I'm offering something completely fabulous which features an utter lack of redeeming nutritional value (which is, of course, why it's so fabulous!). Even though I can usually live without popcorn, I think I could actually start craving this.

Today's recipe is for Bacon-Parmesan Popcorn.

This is ideal for tailgating or for watching the game at home. It's a great treat for any occasion, from watching the Oscars to watching a movie. Truly, how can you go wrong with anything that has bacon???

Prepare popcorn according to package directions, then place into a large mixing bowl.

Makes approximately 8 cups of popcorn.
Posted by Yenta Mary at 8:00 AM

Good grief, Mary! You're making popcorn into a main dish! I'll have to show this to Kevin, the official popcorn maker in the family. :-)

I am a popcorn fiend--I grew up eating it every weekend, since my dad actually grew popcorn--and I have never seen this particular combo, which looks most evil-ly delicious and decadent.

My wife and I used to make something similar, but not with the pieces of bacon.

Angela is right, you are an evil genius and I love you for it. Great recipe!

I've used bacon fat to cook the corn in before but never had I considered slathering it in the bacon renderings, with the bacon! Muchless the parm :) Divine, simply divine!

Oh My Goodness! That sounds heavenly! And I don't even like popcorn! :)

Bacon? Parmesan? Talk about tempting someone this morning!!! YUM YUM and a little more Yum is about all I can come up with!!! :)

What an amazing combination, Mary?! I would never have considered pairing bacon, parmesan and popcorn. I definitely need to try it.