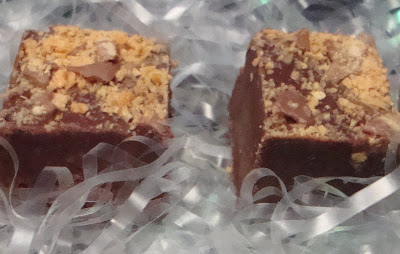 When my BFF Wendy and I were in Pittsburgh recently, we met some wonderful people. It's a good-sized city, but it definitely has a small-town friendliness.

We were welcomed everywhere we went, even at Mike Feinberg's bustling souvenir shop pre-Steelers game. If you think we take football seriously here in Ann Arbor, truly, you ain't seen nothin' - these folks had already started their party, in full regalia, on Saturday afternoon before Sunday's game! But still, despite the hectic atmosphere, the employees took the time to talk about the local lingo a bit, and to give us brunch recommendations. They were so, so nice to us! 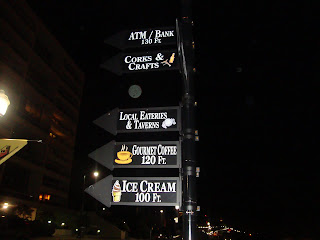 But the most extraordinary welcome we received was at Grand Brew, a small coffee shop that we found while driving around looking for mom-'n'-pop places to support for dinner. We saw this sign, and immediately followed the arrow to the local eateries and taverns. We ate a nice dinner of mini burgers and pierogi, then meandered across the street to the ice cream shop we'd passed while touring the neighborhood.

Except our plans were thwarted when we found the shop closed.

A few doors away, though, Grand Brew was open. There was a sign in the window proclaiming that we could find both coffee and chocolate there ... well, that was all the invitation we needed!

Howard Todd, who introduced himself as "Todd," was behind the counter serving the customers ahead of us. That gave us time to peruse the beautiful array of pastries, cookies, and other treats. Wendy chose the Pecan Turtle Fudge, rich with caramel; I had planned to get an enormous chocolate whoopie pie, but then we chose a vanilla one for balance. 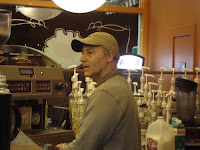 We sat and enjoyed our sugar rush, and Todd came over to bring us the last little strip from the batch of fudge, laden with dippings of caramel. He talked with us briefly before the next flurry of activity, proudly showing us an article from the Pittsburgh Post-Gazette which featured his astounding string of working 4-1/2 years without a day off. Today will be the 1193rd consecutive day that he's worked; he greets and serves customers at Grand Brew every single day, including holidays and weekends.

As we read, ate, chitchatted, and expressed awe and respect for such dedication to a work ethic, I - of course! - brought out my camera. After all, I take pictures of everything I eat. And that prompted conversation about AnnArbor.com, Food Floozie, the necessity of having a passion in and for life, and sharing our mutual enthusiasm for good food with others.

At that, Todd brought another gift to Wendy and me - a cannoli. As he told us with a broad smile, "This is the reason I married my wife." Patty DiFiore Todd is from an Italian family, and has worked as a caterer in addition to running the ice cream shop two doors away that we nearly went to instead of visiting Grand Brew. The shell of the cannoli was thicker than most, which are often so fragile that they shatter at the first bite. In addition to this, the filling was made with mascarpone, making it lusciously rich.

Todd showered us with still further bounty: he brought us a rich Caramel Latte Macchiato, a Spiced Chai Tea Latte that was deliciously reminiscent of gingerbread with a special secret spice blend, a glazed cinnamon roll so tender - without the ever-so-slight crust found on the surfaces of most rolls - that it was almost like cotton candy when torn apart, and an espresso with just a hint of amaretto. Todd beamed as he bestowed these gifts upon us, filled with pride to show off the fabulous goodies.

And I'm not ashamed to tell you that Wendy and I ate, drank and relished every sip and bite!

This is not actual old-fashioned fudge, made with a candy thermometer and lots of monitoring. But it's a reasonable facscimile, and really good! It's also an easy and fast-to-prepare recipe for busy holiday celebrations, for last-minute warning about guests or bake sales, or simply for satisfying a craving. (I'd have made chocolate caramel fudge in honor of my new friend Todd, but there was no caramel frosting to be found while shopping on the day I prepared this.)

Line an 8x7" pan with foil, extending the foil over the sides of the pan, and grease the foil. (If you don't have one, an 8"x8" pan will be fine; the fudge just won't be as tall. I have an odd-sized dish that I found at a thrift shop.)

In a small saucepan, melt together the peanut butter chips, chocolate chips, and frosting over low heat, stirring constantly. Once melted and completely smooth, pour the mixture into the prepared pan. Sprinkle the crushed Butterfinger over the top, then refrigerate for 4 hours or until firm.

Remove the fudge and the foil from the pan; pull the sides of the foil down to expose the fudge. Trim 1/2" from the edges, then cut into squares.

Butterfinger is my nemesis!! I have such a weakness for those delicious bars. I will make this recipe, but not before company is coming so they can help me polish it off. And believe it or not, I've never had a cannoli. That looks scrumptious!

Mary, you are a genius!!! Butterfinger fudge??? And, really, who needs "old fashioned" fudge when you have this??? YUM!

It sounds like you had an awesome trip and the food you had! The pictures were torture enough, but the description makes me super sad that we didn't stop in Pittsburg when we went to PA a few years ago.

simply dropping by to say hi