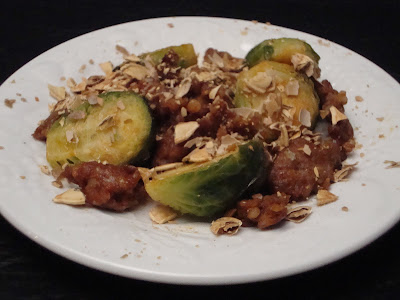 I happen to be one of those odd people who like Brussels sprouts. I may be gauging things incorrectly, because I know so very few others who will eat them, but it seems I'm in a distinct minority.

I'd say that this was okay, leaving all the more for me. But c'mon! They taste good, they're nutritious, and they're so easy to prepare. They're even cute - little baby cabbages that they appear to be (since they belong to the same family).

But if you need a bit more than just butter and salt on the Brussels sprouts to entice you to eat them, then here's a dish that might lure you in.

Simply boil the sprouts to prep them a bit, then saute them with some good spicy chorizo. I happened to still have some toasted pumpkin seeds loitering in my kitchen after Hallowe'en, so I sprinkled a few of them over everything for a bit of extra flavor. The dish is fine without them, but they certainly enhance it.

If you usually dislike Brussels sprouts, or know of others who do, then try this recipe - you may just find you can't resist them anymore!

Fill a medium saucepan with water and bring to a boil; add the Brussels sprouts and cook for 10 minutes, then drain. Slice them in half vertically, through the stem end.

In a large skillet, cook the chorizo over medium heat for 5 minutes, breaking it up as you cook it. Add the Brussels sprouts and the salt; cook for 10 more minutes, stirring occasionally, until the vegetables are tender and the sausage is well-browned. Sprinkle with the pumpkin seeds.

You make everything look good, Mary! Chorizo has always scared me a bit.

I've always been a brussels sprouts lover, Mary. I bet the addition of chorizo just makes them that much better. It looks and sounds delicious!

Mary, Mary.. only you could make me want to eat Brussels sprouts... putting chorizo in there is a genius idea!!