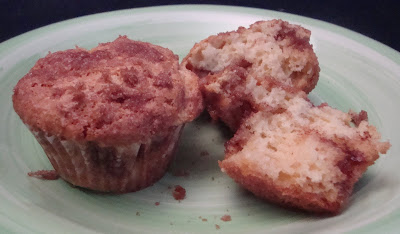 The Muppets have a new movie coming out today, which I'm hoping to see tonight. Everyone do your best impression of Kermit flailing his arms and shouting, "YAAAAAAAY!"

I used to love movies. I was raised on all the classics, and I'd see virtually anything that came out - a wide variety, from Hollywood blockbusters to obscure foreign films.

But over the years, I've lost patience with just sitting and staring unproductively. It's a rare movie that I care enough about to bother watching. I saw "The King's Speech," which I absolutely adored; and I've also recently seen "Puppet," about a beautifully poignant puppet show telling the story of an eccentric Depression-era photographer.

So it's on my agenda to see "The Muppets" today, which shows how much I cherish them. The characters are distinctive and idiosyncratic and quirky; they are so very real and so very - dare I say it? - human. Who doesn't love them? I can't let this new movie pass me by! 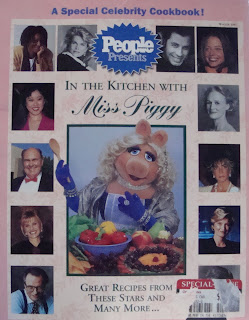 In honor of today's big event I've baked a variation on Gene Shalit's Movie Crumb Cake, slightly modified from a recipe in In the Kitchen with Miss Piggy - a celebrity cookbook published in 1996 to support Citymeals-on-Wheels, which provides "1.8 million meals to over 16,500 elderly New Yorkers each year."

I found this amusing little book at a thrift shop and just knew it had to go home with me. It features recipes from Whoopi Goldberg, Ivana Trump, Samuel L. Jackson, Willard Scott, and many others. And famed chef Pierre Franey even dares to offer a recipe for Cuisses de Grenouilles Poulette [kwees deh grun-WHEE pooh-LET] - Frogs' Legs in Cream Sauce. I'm quite certain that Kermit is quivering.

Miss Piggy's introduction to the cookbook is priceless:

"When I was aproached to write this cookbook, moi thought: Why not? If Oprah can do it ...."

She recommends a variety of kitchen essentials, such as a curling iron ("For turning spaghetti into rotini"), a dog ("For cleaning the kitchen floor"), and a fire extinguisher ("In case your roast is a teensy bit overcooked").

But on to the recipe!

This was actually supposed to be a crumb cake, rather than cakes; but I found myself with just one egg in my refrigerator, and so I could only bake half of the batter. Since I had no pan that would approximate half of a 9"x9" cake tin, I was left to make mini versions instead. And I used butter instead of margarine, as all good bakers should; but one of Gene's jokes was dependent upon the word "margarine," so I kept that intact when I typed up the recipe.

The instructions below offer the same giddy silliness that the Muppets excel at, so it was the perfect choice for today.

I don't think the title "Movie Crumb Cakes" does these moist, sweet, cinnamony treats any justice, though. So I'm going to call them Muppet Muffins ... for the lovers, the dreamers, and me.

(Don't forget to enter my giveaway for a $25 gift certificate to Hodgson Mills' online store! The deadline is Sunday morning!)

1. Before going to the theater, preheat oven to 325F. (Note: postheat not recommended.) While waiting, line a muffin tin with 6 paper liners.

1/4 cup packed brown sugar
1/8 cup granulated white sugar
1/2 teaspoon cinnamon
1-1/2 tablespoons margarine (this must be exact; do not leave any margarine for error)

Cut in margarine with a pastry blender until it's crumbly. Set aside. (After all that, you set it aside. What a recipe.)

1 cup sifted flour
1/2 cup sour cream (why do they put a date on sour cream?)

5. Divide half of this mixture among the lined muffin tins.

6. Sprinkle half of topping (you remember the topping - that stuff up in the first paragraph marked 2).

7. Place remaining batter (this is the first I hear of "batter." Where did this come from?) on top of crumb mixture (2 - very busy number).

9. Place everything - pans, topping, bottoming, crumbs, the whole business - in oven (which by this time better be at 325F or else you're going to need a new oven) and set timer (I forgot to tell you, you need a timer) for 20 minutes.

Donate muffins to neighbor and go to the movies.

I remember watching the muppet show when I was a kid.. and when the movie.. The Muppets Take Manhattan comes out.. I was so there!! I love that they are bringing them back to the big screen!!!
Love this cookbook too.. Miss Piggy's intro is fantastic!!
And of course, last but not least, the muffins sound delicious! Would love one or two or three right now with my coffee!
Hope you do get to the see the movie... enjoy!!

I love the muppet show! This cookbook would have been a huge hit when my kids were little.

Thank you for stopping by and participating in the Get Wired Blog Hop. I am following you.