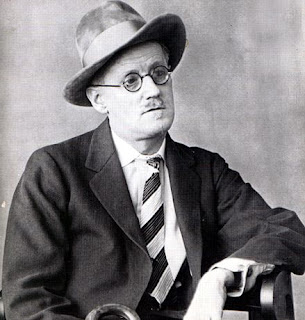 Today, for those who don't know it, is yet another of the odd and sundry holidays that I celebrate at my house.

Among others, there are the standard ones (Christmas -- cookies and more cookies!), the Jewish ones (Rosh Hashanah -- the new year, Chanukkah -- the festival of lights), the secular ones (New Year's Eve, Hallowe'en), the ethnic ones (St. Paddy's Day), and the literary ones (Robby Burns Day -- January 25 -- in honor of Scotland's favorite poet). I'll celebrate virtually anything -- as we already know, it's all about the food!!!

But today, June 16, has a special place in my heart: today is Bloomsday. It is the day featured in the great novel Ulysses, by my beloved James Joyce.

I first read Joyce as a college freshman, like so very many both before and after me. My Freshman Comp teacher encouraged my writing, and as he got to know me realized that I would undoubtedly find a kindred spirit in an author from Ireland (I'm 1/4 Irish -- my paternal grandmother was born and raised in Cork), who had been raised Catholic (13 years in Catholic schools, God help me!), and who had become disillusioned with the Church (I now consider myself a secular Jew). I found a copy of Dubliners, a collection of stories ending with the extraordinarily beautiful and poignant "The Dead," and immersed myself for the entire next night in reading the book. I have been a Joycean ever since. 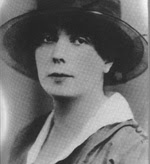 Ulysses follows a day in the life of Leopold Bloom as he meanders in an Oydssean fashion through Dublin on June 16, 1904. In real life, it was on this day that Joyce went on his first date with the woman whom he would eventually marry, Nora Barnacle (originally Norah). She was instrumental in his life in so many, many ways; and God knows she put up with a lot living with a genius! What a singularly unique and romantic way of commemorating such a critical date (and person) in one's life -- using it in one of the greatest works of English literature!

The book was considered obscene, so many publishers refused it. Yeah, there's language issues, bathroom talk, infidelity, some activities that are rumored to make a person go blind ... and its stream of consciousness was radical at the time, so many people didn't understand the book or what purpose it might serve.

So an expatriate American living in Paris, Sylvia Beach, originally published it in 1922 through her bookstore Shakespeare and Company. (And I cannot tell you how thrilled -- thrilled! -- I was to find a framed photo of the place years ago at a street art show! It now has a proud place in my library-themed half-bathroom, so that all can see it and worship.) The book wasn't published in the United States until 1933, after a trial(!) and a judgment by U.S. District Judge John M. Woolsey that it wasn't pornographic. 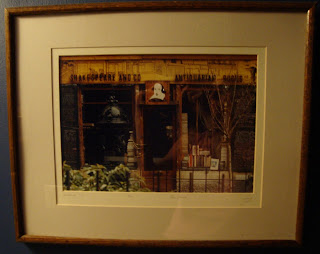 But anyway ... I am not the most devoted and erudite of Joyceans; I'm simply a sincere fan. And since virtually everything in my life revolves around food, I don't celebrate Bloomsday by taking a tour through Dublin that follows the book's storyline or by reading Ulysses again each year. I make traditional Irish food, though I'm not sure yet whether we're eating salmon or lamb, or whether I'll make rhubarb crisp.

I could, I suppose, make a meal in honor of Leopold Bloom's favorites:

Mr Leopold Bloom ate with relish the inner organs of beasts and fowls. He liked thick giblet soup, nutty gizzards, a stuffed roast heart, liver slices fried with crustcrumbs, fried hencod's roes. Most of all he liked grilled mutton kidneys which gave to his palate a fine tang of faintly scented urine.

But I'm none too keen on any of these particular items myself ... not that I've actually tried them, but I kinda have a feeling! So I'll spare you a recipe for any of them, and devote my fingertips to a more suitable purpose: typing out my recipe for Brown Soda Bread.

I make this every St. Paddy's Day, and always say that it's so easy it should be served more often throughout the year. Well, here's the proper occasion! Honor Bloomsday -- a celebration of literature and of love -- by making this hearty bread which is fabulous just plain with butter, or served with jam or with cheese. "... yes I said yes I will yes."

Preheat oven to 425 F. Sprinkle a bit of flour onto 2 baking sheets, and set aside.

Sprinkle half of the remaining flour onto the countertop, and knead it into the dough; repeat with the rest of the flour until the dough is no longer sticky.

Divide dough in half and shape each half into an 8-inch round; place one dough round onto each of the prepared baking sheets. Slice an “X” into the top of the dough, and bake the breads for 30-35 minutes until they are golden brown. Let cool completely before serving.

And check out this article in today's New York Times encouraging the humanities and, especially, the reading of Ulysses ... :)

Soda bread is one of my favorites. Thanks for sharing this recipe!
I'm follower #169--your newest follower from Welcome Wednesday. http://jonbonjovious.blogspot.com

I am now following you thanks to Welcome Wednesday and it would be nice if you could share back the love here! Also if you need technical support I just have a post about that today! hyperlinks?? anyone??? I think so!
Happy Welcome Wednesday!

loved your post. my husband is from Ireland. at times, some strange food items. i love to make this bread as my husband can eat it all byhimself. have a good bloomsday. rose

I wonder why it is that 'brown soda bread' sounds more appealing than internal organs. :-)

Have a happy birthday celebration for your pal. ;-)

I am already following you but want to tell you about the follow me blog hop myself(Traci66) and my sister(Heck of a Bunch) host. It is called Keepin' Company Thursday. I hope you and anyone else wanting to link up will come by tomorrow (Thursday) and link up.

I love soda bread. I still have yet to actually make it...I'm thinking when I do, your recipe will be the one I try! (it's too hot in Arizona right now to turn on the oven unless it's absolutely necessary!!

I've never read Ulysses but it's been on my 'To Read' list for years. I had forgotten all about Bloomsday.

Love soda bread but never make it at home. This looks like I might be able to do it.

I have never made soda bread. That sounds really great! I love the whole post...I never even knew about Bloomsday!

That looks really good! I'm visiting from Welcome Wednesday. I already follow you.

You and your "holidays"...I am beginning to get suspicious about this whole thing. I think you are manufacturing these to justify your flooziness and cooking;-)

Following you from Welcome Wednesday!

Just wanted to say THANK YOU for participating in this week's Welcome Wednesday! We hope to see you weekly! We are happy to follow your blog! Thanks for helping spread the word about our event by grabbing our button!

Kristin & Jaime
Take It From Me
http://takeitfrom-me.blogspot.com

We go to an Irish pub once in a while for lunch and they serve a lovely soda bread though I'm willing to bet yours is better! And if I ever do pop in for tea ... we can tell Jeremy to stuff it ... coz I'd like the cranberries better too! :)

already ur follower. Just stopped by to say hi

A student any English prof. would be proud of! I haven't touched a bit of Joyce since college, but you have me curious about how I'd react to it as an adult!

That looks delicious! Definitely one of my favorites...

Already a follower, just stopping in to say a quick hello!

Great background on the author and the book sounds intriguing, LOL. Great use of the WOW. I don't think my gullet would take kindly to the tang of faintly scented urine. And on a clearly I don't bake from scratch tip, I was thinking the bread had soda pop in it, kinda like 7-up cake, LOL.

My husband is from Ireland and was telling me all about this today. Thanks for stopping by my blog, Taste. I am now following you too and am looking forward to many more great recipes!

PLEASE don't make me what he's having! Blech!

Thanks so much for joining in!

Mmm... looks like a lovely homemade bread. I think I would prefer the cranberries too. Thanks so much for sharing!

Hmmm ... Irish brown soda bread or organ meats? Not a tough choice for me - I think offal is awful (get it?)! :D I remember that 'scent of urine' when my mother (English) prepared the kidneys for steak and kidney pie. Most people just chuck the kidneys in, so the urine 'scent' would be in the pie. At least my mother got that out before they went into the pie, but I still wouldn't eat it!

I make my Irish brown soda bread a little differently than you, but yours looks wonderful too!