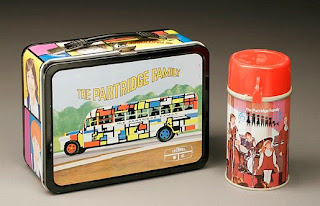 I know this makes me seem utterly ridiculous -- not to mention OLD! -- but my most prized possession when I was in 3rd Grade was my Partridge Family lunchbox.

"The Partridge Family" was an insipid little show about a musical family, with a heart-throb for an oldest brother, a wisecracking child in the middle, and some sweet kids complementing those two. Single mom, widowed. Hoaky storylines, drivel-filled songs ... and I loved it!

Of course, anyone who's ever been a child or raised one knows that a lunchbox is a key ingredient for social acceptance and "cool" quotient. And I wanted a Partridge Family lunchbox ... oh, I wanted it desperately! I don't remember what I was carrying my daily pb&j in when this vision of perfection entered my consciousness, but it was certainly deficient once I'd seen what was possible.

A line from the great Irish poet William Butler Yeats sums up my past: "I remember little of childhood but its pain." My sister had significant emotional and psychiatric issues, and was violent and abusive. My father travelled a lot and was exasperated by the misery of his family. My mother suffered from depression and a martyr complex. I grew up afraid in my own home, shamed that other people didn't live as we did (little did I know ... as an adult, I know that everyone has a story!), essentially raising myself because my sister sucked up all the oxygen and joy in the house.

I can't tell you how many times I was told that if I were only more patient, more understanding, more tolerant, less snippy, none of the attacks and tantrums and other violations would occur ... if I were perfect, in other words, my sister wouldn't be provoked. The weight of the world -- and my family's happiness -- rested upon me. And I couldn't live up to that, no matter how much of a perfectionist I might try to be.

Now, I've likely shared FAR more than anyone cares to read about! "Hie thee to a therapist," I'm sure you're saying! But that's painful work, and I don't do pain. I bake. I cook. Those are therapeutic for me.

But, as always, I digress! There is a reason I shared this sordid little story with you. I wore hand-me-downs, because my sister was always 3" taller than I was. So much money was spent on her special ed and medical expenses that little was left over for anything else, and my parents are the least fun and frivolous people on Earth anyway. I did go to private school myself (the same all-girl Catholic school that Lady Gaga, did, by the way!), had ballet and music lessons ... I wasn't deprived in some ways, but in critical areas like feeling loved and having self-esteem and feeling as though I warranted any attention, I was sorely lacking.

Until one day, which I can still remember vividly, when my mother came into my room as I was getting ready for school. And in her hand -- you guessed it! -- she was carrying something special just for me ... a Partridge Family lunchbox!!! I'm getting teary just thinking about it, which probably says a lot of things (and none of 'em particularly noble!) about me. 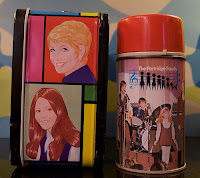 It was brand new ... there were no dents ... it was perfect. It had a picture of the Mondrian-influenced bus, and also pictures of each family member; and it included a thermos. I was so thrilled, so giddy! This was one shining moment in a life of stress and sullenness ....

And so today -- it being Music Monday, after all -- I'm sent on this little detour down Memory Lane because there's a song that's been playing in my head for a bit now, after being asked to take "a break" from my boyfriend as he regroups after some admittedly very difficult circumstances, and being left with feelings of confusion and sorrow and unworthiness and everything else imaginable as a result.

This song led to thoughts of the lunchbox, which of course carries sandwiches and such. Somehow, some way, however tangentially, I always find my way to food!

I'm adding this to the Bunny Hop (oh, the bunny's so cute!) sponsored by Erin at Dropped Stitches, to the Meet & Greet Monday sponsored by Marlessa at Southern Reflections, and to Monday Madness hosted by Micael and Meghan. Click on the links and join in!!! 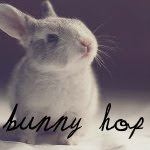 Oh wow...that was a lot for a monday morning especially as I started thinking of a cute witty little comeback re: the partridge fam! Childhood is insane, and while we all could definitely use some therapy, you seem to be pretty good with yourself, and that is the important thing. We all have our baggage that we carry into our adult lives, I'm just trying not to screw up my own kids too much. For the record, my lunch box was Boomer, from Here's Boomer? Sad huh?

I loved the Partridge family!

I'm a new follower from Meet & Greet Monday.
I hope you'll come check me out at PS Mom Reviews and follow me too!

That is a wonderful story!! And, the Partridge Family rocked!

You made me cry and laugh at the same time. I think we can all relate in one way or another. Your writing is beautiful! I myself find that through cooking I can find solace and a lot of happiness. My kitchen is my therapist and my best friend. Amen!

By the way, I had a Partridge Family lunch box, too! I thought I was all that!:) I'll be following your lovely blog!!

No wonder you treasure that lunch box! There are many stories out there that we'll never know. Thank you for sharing yours.

Thank you for your comment on my blog this morning, btw. :-) Very encouraging!

Oh Mary,
So much pain hidden in those cheerful words and phrases. You have a knack for words that hides the deeper things from those who don't take the time to dig. I suspect that is a leftover from childhood as well. In my life it was a mother who suffered a nervous breakdown as I hit my (hormonal) teens and a brother who was more verbally needy than I was. I can't (don't) blog a lot of that now because my parents read my blog and no good can be done by dragging them back through my pain at this point. We move on and we forgive as best we can.

So sorry about the Boyfriend's need for a time out. Hopefully it will be short-lived and you won't be left wondering for long.

As for the Partridge family ... David Cassidy was the one poster that lived on my junior high walls. Unbuttoned shirt. Messy hair. Ahhhh ... such sweet dreams were imparted as I gazed upon his image. God had other, better, plans in store for me.

I used to love to cook and bake. Now I just love to eat! I'd enjoy cooking and baking more if it didn't require cleaning up afterwards!

Hugs sweet girl!
You are loved and appreciated!

I am a new follower from Bunny Hop! I love your blog and the name is so creative and adorable. I now have the songs "come on get happy" and "I think I love" stuck in my head, but its all good because that song makes me smile.

almost forget if you want to check me out here is my blog link:
www.necciescreations.blogspot.com

Hi there! Who doesn't love the partridge Family?? Found you from Meet & Greet Monday, nice to meet you! :)

Well, I know that you know that all of that family dysfunction had nothing to do with you. Of course, we can know things in our heads and still not quite get it in our hearts. Personally, I think that therapy can be a very good thing so long as you don't stay stuck there. When you get to that "aha" place that you may not even know is there you can then walk away a freer and lighter person. It is the people who go and never leave that stay churned up. As for the boyfriend... well, he will do what he will do. That sucks. All that you can do is pray that he sees things clearly in his head and he makes a choice that is truly what he wants. Once he does that, the ball is then in your court. Sending lots of love, prayer, and positive energy your way.

I had a big red Tupperware lunchbox when I was a kid. Everyone else had cool character themed ones and i had this big monstrosity that I hated. Now though, I wish I still had it as it was great- kept things neat and had lots of room.

Sorry about the boyfriend needed time "off". :( I hope things get sorted out for you two soon.

Oh the memories! I grew up on the PF it was so awesome to listen to this, have a fantastic MM!
http://moorebloglife.wordpress.com/2010/06/14/musical-monday/

that was a special story. i never had a lunch box, just bags. have a good day. rose

The mad woman behind the blog said...

WOW.
Sounds like you have more clarity than most people who seek help.
Bring on the baking!