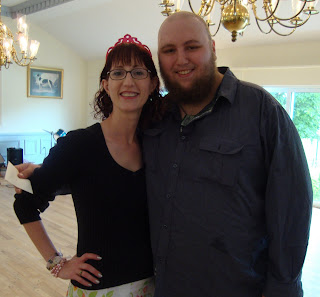 Well, I'm exhausted and wish I'd had enough sense to take today off from work to recover, but Jeremy's graduation party was TOO MUCH FUN!!!

Unfortunately, due to it also being First Communion and wedding and whatnot season -- not to mention the monsoon and flooding and tornado that hit Southeast Michigan on Saturday night (contributing an unwelcome 1" of water to my basement clutter, which will now have to be pitched by Jeremy and his buddies in exchange for pizza and sodas) -- not everyone we'd invited could attend. But we were thrilled to share our celebration with those who could, and hope they not only enjoyed themselves as much as we did but that they've recovered from their diabetic comas after indulging in our extensive (24 offerings, all homemade!) Dessert Buffet. 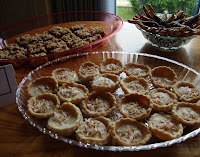 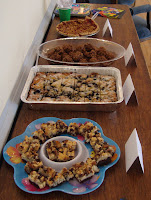 There was also a reunion concert of 90 Miles From Vegas -- Jeremy's band with friends Andrew (drums) and Jordan (bass), and a jam session with another friend, Doug, and his dad Fred. It was LOUD! But it was fabulous!!! 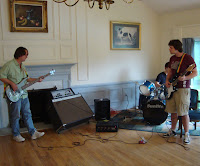 Anyway, I'll offer more details and recipes throughout the week, once I recover. But since today is Music Monday, I thought I'd also share a song from my very favorite group (other than Jeremy's band, of course!): Roxy Music. The title song from their last album together -- the original of which is still in my cluttered basement somewhere scratched but priceless, and hopefully not soggy -- starts with the line that I used for the title of today's post. Enjoy!!!

Congrats to Jeremy (and his very proud mama!) Those milestones are meant to be celebrated, especially when they are worked for so hard.

Looks like a marvelous time was had by all. I can't believe how many desserts there were. You must have been cooking FOREVER!

~~ Kat ~~
My Tots Exactly!
My Tummy Calls
My Game of Chance
From a SAHMmy to a WAHMmy

Congratulations to Jeremy! The food looks delicious. Roxy Music is one of my absolute favorites and Avalon, one of my favorite songs. Well done Mary!

looks like you had a lot of fun! Love the tiara! Food looks yummie!

Looks like fun! And um - my mouth is watering!!

That dessert buffet looks to die for!

I am running a little late for the 40 and over Friday Follow but better late than never right. I am now following you and hope you will come see me at http://traci66.blogspot.com

Thanks for accepting the award. I actually had someone design that button to make it as super darn cute as possible.

Just wanted to mentio how much I lived in your neck of the woods so I could attend one of your parties. That dessert buffet was INSANE! Shut up!!!! I'm off to hit the trough, I mean, fridge for some dulce de leche and ice cream!

I'm your newest follower. Please stop by and check me out as well. http://motherhoodthetruth.blogspot.com/

Wow! I can't wait to see some of those recipes. 24 desserts sounds simply amazing! :)

Rest up and enjoy the week!

24 kinds of homemade desserts...I would have been in heaven - just a mild love of sweets here! I am a little behind...but thanks for linking up to Tickled Pink. I love having ya!