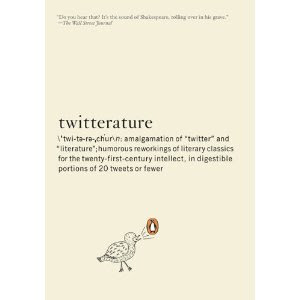 I found an entertaining? amusing? appalling??? book called Twitterature, by Alexander Aciman and Emmett Rensin, at the library the other day. Its claim to fame is that it offers "humorous reworkings of literary classics for the twenty-first century intellect, in digestible portions of 20 tweets or fewer."

Now, I happen to be in possession of a Bachelor's degree in English Language and Literature from the University of Michigan, and one of my instructors had encouraged me to pursue graduate studies in semantics and rhetoric. I am quite the fan of books -- the real kind with the scent of ink and paper, with weight, with substance both physical and intellectual. And you can imagine that someone as verbose as I am has some issues with Twitter!

And yet, how could I resist seeing how the greatest works of literature had been deconstructed and decimated into tweets???

Well, it's not quite as erudite as Cliff's Notes. And yet, it does sum up the storylines for those who have the attention span of gnats. I guess with all the time people spend facing some sort of screen -- movies from Netflix, playing games on Wii instead of going out into the sunshine, posting their every move on Facebook, and (guilty as charged!) posting every little thought and whim and batch of cookies on personal blogs -- "... who has time to read those big, long books anymore?" (from the back cover of the book)

Like many book characters, I'm pretty bored. Oh! A white rabbit! Just like in The Matrix. That movie was pretty dope, if you're on drugs.

Down into the rabbit hole I go! Ohh, that's rich. I feel like Neo.

Is it OK to drink from a mysterious bottle that's been opened? What if there are Ruffies in it?

I don't know what's going on, but in a typically feminine manner I'll allow confusion and being flustered to make me cry up a storm.

Am I still the same little girl that I was before? I feel like my 'self' is being deconstructed. And in HD, to boot.

I asked a mouse how to get dry from all my tears. He gave me a dry history lesson. People are purposefully confusing my words.

I'm in the rabbit's house. Here's more mysterious juice. Should I drink it again? Oh what the hell. Hope I won't be sore afterward.

Why are people throwing rocks at me like I'm Mary Magdalene? I'm a little girl, not a biblical prostitute ... er, Christ's wife.

I found a stoner Arab caterpillar. He made fun of me. Oh yeah? At least I'm not three inches tall with a case of the munchies.

At a tea party with a crackhead hat man. He's a schizoid. Insanity is part of his public image. After all, he put 'mad' in his name.

This land is terrorized by the Queen of Hearts. She's a card. Wouldn't it be funny if I just destroyed her army by shuffling them?

I'm in trouble. I'm not sure what I did. This is the worst day ever. I need a drink. Not from an unmarked bottle, though, no more of that.

Now I'm on trial. Another worst day ever. The queen stole my integrity and made me a felon. If I knew magic, I'd make her disappear.

If only I could grow large and crush them beneath me. Wait. I feel so strangely powerful, I'm huge. This courthouse is going down.

A grinning cat, a tweeked-out hatter? A sadistic queen and a terrifying baby? This is the kinda ("stuff"-- family-friendly-ish blog here!) that sends people to years of therapy.

God that was just insane. I need another adventure like that like I need a hole in the head.

Hmmmm .... Are you feeling more educated and learned now???

Please note: I do want to take issue with the insult to women that all we do is cry when we're stressed, with the designation of the caterpillar as being an Arab stoner, with the outdated view that Mary Magdalene was a prostitute, and especially with the use of the word "schizoid" which is an insult to people with mental illness. A significant number of my loved ones suffer from bipolar disorder and/or anxiety issues, so I am personally offended by such flippant and insulting use of the term .... 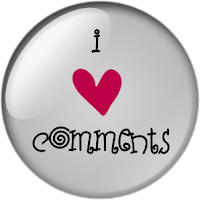 I too suffer from anxiety issues. And this to me is insulting, and not just that, but these books are classics. I feel like this ruins the great stories that they are, and turns them into short snippits, which suck, just so lazy readers don't have to read the whole book. I am guilty of updating FB like crazy, and blogging, but I love to sit down and read a good book too. Who knows, some people may like it. But to me, you can't turn classic books, or any books, into short sentences of words that essentially have nothing to do with the book. hahaha. Ok, im done hogging your comment spot now! ::Kristin::

hmmm...I'm really not sure about this. Alice in Wonderland is one of my favourite books and it's kinda sad to see it being hacked to pieces....and why the hell do they refer to Matrix?? O_o?

I'm assuming that this was meant to be funny, not to take the place of real literature. And if that's the case, it appears to have missed its mark by a long shot. I'll stick with The Reduced Shakespeare Theatre Company when I want a laugh.

I'm glad to see that I'm not the only one who found this to be fairly galling. Didn't know if I was too old to appreciate the reduction (a.k.a.: desecration), or if I'm just too old-fashioned in my appreciation of books. So thank you for agreeing with me that this just is so, so not right!

I have a love hate relationship with Twitter. I love to hate it. I thought I was following you from a blog hop the other day but I realized I wasn't. That, or google is trying to challenge what's left of my sanity. I am following you now!

why can't some things kept the same? when we change we sometimes miss the beauty of the original thing such as a book. have a good day.

I do not like this at all. Not at all! Keep the classics as they are - there are a reason they became classic!

Not a fan here. Some things just shouldn't be confined to tweets!