"Let's Have Another Cup of Coffee" 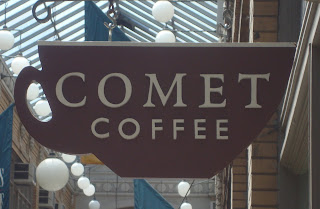 Okay, on to Part 2 of this past Saturday's culinary adventure! I know everyone's been hanging breathlessly since yesterday, waiting for this final installment about Saturday's hot dog and coffee extravaganza ... :) Can't have my faithful followers keeling over from oxygen deprivation, now, can I???
After eating hot dogs in the sunshine, Jeremy and I meandered over to Comet Coffee (located in the Nickels Arcade, for any Ann Arborites who should be hanging their heads in shame for not knowing that). I'd written about my love of -- a.k.a.: desperate need for! -- coffee for AnnArbor.com recently, and two different readers had urged me to go to Comet:
"Mary - you ought to go Comet, and try their La Esmeralda coffee prepared via the pour-over method, it is exquisite!!!!"

"Have you tried the Cocoa Latte from Comet Coffee? They use Calder Dairy Chocolate milk, super yummy!!"

Well, when God tries to point you in a certain direction, you oughta listen. (Yeah, I'm not too good at that ... I'm a tad stubborn, and a bit of a control freak since I have no control in any area of my life and therefore try to wrest it wherever I can.) But when God repeats the message, well ... Thou shalt get thy tuckus over there!
Comet Coffee has long been on my "to do" list; however, said "to do" list is exceedingly long, and money can sometimes be less than plentiful, and so some items get pushed further and further down.
But Saturday was the day! We meandered into the bright, open shop and found 3 people behind the counter -- one working the register, one prepping, the other artfully handling barista duties and 4 pour-overs at once. We were greeted immediately and with exceptional friendliness as we reviewed the short menu: coffee, tea, vac, French press, the afore-mentioned pour-over ... truly, the most essential basics.

Having come in with 2 recommendations, my poor little frazzled brain was spared having to pick beans and method and iced vs. hot. We ordered 2 cool drinks -- La Esmeralda and the chocolate latte -- and sat to wait as they were prepared just for us rather than merely being poured out of a carafe that had been sitting around for awhile. Admittedly, I'm not enough of a snob to turn down that other stuff (though I refuse to drink instant or freeze-dried!), but I do appreciate the beauty of coffees that would bear Jeremy's and my names exclusively.

The latte was ready first, and was so rich that it looked like chocolate milk. It was creamy ... it was decadent ... it was really, really, really good!!! Jeremy and I split it, though I got perhaps 2/3 to his 1/3. But that was remedied by his drinking most of the iced La Esmeralda, which was probably the most perfect coffee we've ever had ... and we've plowed through a lot of it, brewed in many different fashions.

Jeremy likened the coffee to Guinness (we won't discuss the fact that he's ... ahem ... 19). The depth of flavor, the depth of color -- I had to move the glass closer to the window so that at least a few rays of light could shine through it for this photo. It was extraordinarily smooth without even a hint of bitterness -- and I can detect bitterness quite readily, even in sweet things like Newman-Os (which can have all the organic ingredients they want, but if they taste bad they're worthless. I do really like the ginger ones, though ...).
But I'm meandering through the flow chart that is my brain again .... 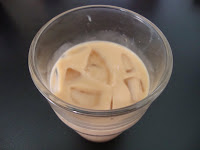 I added a bit of Turbinado sugar and some half-and-half to my share of the La Esmeralda (don't judge me!!!), and enjoyed it very much just that way -- the qualities of the coffee were only enhanced, I'd say, rather than sullied by the sweetness and creaminess. Jeremy, however, drank his straight; and he declared it to be the very best coffee he'd ever had, period. Ah, make that an exclamation point!
We looked at the shelves to see if we could buy La Esmeralda beans to take home; but, alas, they are so precious that they are reserved only for the store. The very chatty gentleman who'd taken our order explained that they are auctioned each year, such that the shop owner stakes a claim to what he'll offer to customers but there isn't anything else available. But we were at least offered a chance to smell the beans as a consolation prize! Smiles and nods all around, and an olfactory buzz was enjoyed immensely ... :)

(With thanks to Irving Berlin for sharing all of his gifts, but -- at the moment, anyway -- especially for the song I purloined for the title of this post ...)

Thanks for checking out my blog! I love the name of your blog :) Will be following along as well :)

Thank you so much for stopping by my blog! I'm following you now and am really looking forward to getting to know you!

The mad woman behind the blog said...

Your timing is just cruel! Sure, come follow thru my misery as I live w/ a half ripped out kitchen and then you have a FOOD BLOG!!!!!
Cruel I tell you!
(Having no stove is KILLING ME!)
Thanks for the follow! Right back at ya!

That looks good! I'm following back!

Had to look because you had Food in your title and I love collecting recipes and ideas.

Can't say I like coffee at all though :p

Now a good cup of tea or hot cocoa and I'm in!

Hope you get a chance to stop by my blogs. The links are in my profile.

Hi! Follower from friday follow c'mon over and visit☺

Cute blog! I'll be back to read more, I'm following too, thanks!

Following you, please stop by and follow mw! Can't wait to read more!

cute blog and like your writing! thanks for entering the giveaway for Skoy and hopping around with us this week! www.breebee.com

New follower from FF! Your blog is so pretty, I am very excited to explore it more. :)
~Jennie
http://sweeptight.blogspot.com

Great blog! I'm Friendly Friday Following you. Hope to see you around my blog too. :)

Thank you for visiting today (and following) hope you stick around! Following you back!

I could go for nice, cold and chocolatey latte right about now.

Stopping by from Tickled Pink. Your blog name caught my eye,lol.

Thanks for joining Fun Follow Friday! I am now a follower.

Thanks for stopping by and following! I am now following you!... love your blog name!

Love your funny post about food and stuffs. Glad to find a fellow foodie through friday follow! Following you now! Hope you could do the same, drop by and hi!!

Again and again, thanks for the kind words. To clarify: we use Guernsey dairy for all our milk needs. Like Calder it is a local dairy, but we think it gives our drinks a great creamy texture without concealing the flavor of the coffee. The chocolate sauce we use is house-made and features single origin Venezuelan cocoa. It's more true to the taste of the cocoa and less sweet than most "treat coffees" out there. If you'd like to splurge on an 8oz bag of the Hacienda la Esmeralda, we'd recommend buying it direct from the roaster we get it from:

They can offer you a much better price. Glad you enjoyed your visit and thanks for the press!

I'm your newest follower from Friday Follow! You have an incredible blog!! Looking forward to following!
-Angela

I am glad to of found your blog. I am your newest follower. I am visiting you from friendly friday :)

Now I have to go grab myself an ice coffee!

I love Starbucks, so I'm always up for trying new coffee drinks whenever I see a new coffee shop around. Those drinks look delicious, I wish we had that shop in our area! :P

I'm not usually a big coffee person, but now I'm thinking a nice icy glass would be pretty darn tasty right about now!

Thanks so much for joining us for Friendly Friday, have a great weekend! :)

Thank you SO MUCH for taking the time to write and for clarifying which fabulous local dairy products you use. Your shop was wonderful, your employees both remarkably warm and astoundingly knowledgeable ... and, well, I've already raved about the product and will continue to do so ... :)

LOVE, LOVE, LOVE your blog and the name! I am now following you via Fun Follow Friday. I hope you will check out my blog at www.foodymommy.blogspot.com!

This was an interesting read even though I don't {horrors} like coffee! LOL! Nice to meet you by the way! Found my way here from FF40+ and now following.

Yup. Totally want to try this place...totally! Period. Exclamation point. And ya know, I'm thinking that likening coffee to Guinesse is a good thing ;)

Hi sounds like you had a great time! I love coffee.

Thanks for flying with us on Friday-Follow today.

I'm your newest follower! I'd love it if you could follow me back at www.momsbalancingact.com

Have a great weekend!

Hi! Thanks for visiting and commenting on our new random acts of kindness post about Galarraga. When Jake told me the story about how this man's dream slipping away in the matter of seconds, I just couldn't believe that a human being was capable of reacting to something like that without anger or resentment. It gives me hope that there ARE genuinely nice and level headed people in the world after all. He's a class act!

Now I'm following you back. :) Enjoy the rest of the weekend!