The Dish on the Deep Dish

Okay, after yesterday's tantalizing picture of the deep-dish pizza from Giordano's in Chicago, it's time to share more than just its photogenic smile; it's time to dish (ha!) about this amazing work of both visual and culinary art. 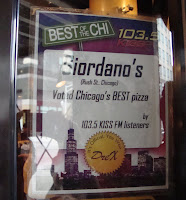 As you can see, the restaurant has been voted as purveyor of "Chicago's BEST pizza” by the people, not by some snobs who are looking for the sorts of exotica that offer caviar and nori and other pretentious toppings which, to my mind, would desecrate a sacred entity. The hard-working folks of the Windy City have spoken, and I have heard them!

And so, Jeremy and I headed to Giordano's after checking in at our hotel. We were hungry after spending 5-1/2 hours on the train. (Though I must say that the train is a thing of beauty, leaving from Ann Arbor and taking us straight into Union Station without security checks, maps, or any other nuisances and accoutrements.) We knew we wanted a small pizza, so as not to have any wasteful excess; and I knew I wanted some semblance of nutrition, and Jeremy was willing to eat spinach. So the decision was easy, for once. 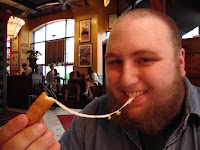 As we waited the 40 minutes that we'd been told it would take to make our pizza by hand just for us, we enjoyed some incredible mozzarella cheese sticks with an excellent marinara sauce that tasted fresh, rather than the norm of a jarred variety. These were very good all on their own -- can't you see how much Jeremy enjoyed them??? But we knew that something even more extraordinary awaited us. 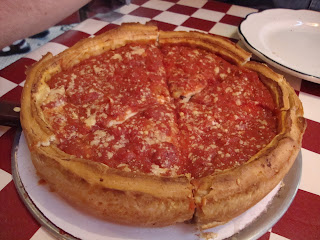 And then it arrived, borne by our quiet but friendly waitress as though it were a crown being presented at a royal coronation. We explained that I write a blog about food and that I always take pictures of what I'm about to eat; she was very gracious in helping to set the scene and in letting Jeremy lift the first slice of pizza to show it at its perfect angle. Then she served us, and we took a brief moment to simply bask in the glory of what we were about to enjoy. 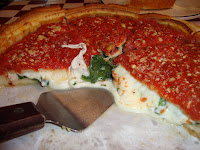 And enjoy it we did, heartily! The bottom crust was crisp, despite layer after layer of cheese and sauce and spinach and more cheese and still more cheese. The sauce was perfection – neither too spicy nor too bland nor too sweet, but flavorful and zesty. And the cheese … well, the photos speak for themselves, don't they??? Luscious, rich, gooey, divine.

Now remember, I'm a girl who grew up in New York City, and I do believe – as one of the few certainties in the universe – that the charred, hand-tossed, thin-crust pizza with a swirl of sauce and a variety of cheeses is just about the closest thing to Nirvana as food can possibly be. But how can I deny the extraordinary experience of a Chicago-style deep-dish pizza??? Really, the two may share the name of “pizza,” but they are such distinctly different entities that it is impossible to adequately compare them. Each is seductive and sublime in its own way. 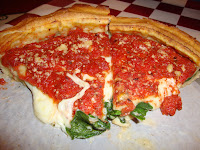 People often are surprised at how good an eater I am when I'm happy and contented, as I am after my weekend of reuniting with Tom. So my having eaten two pieces of this pizza at Giordano's, in addition to half of the cheese sticks, should only come as a shock to people who don't know me at all. Jeremy ate two pieces as well, and we brought the last two pieces back to our room; it didn't take long for Jeremy to finish those off as well, which made me happy – he earned that treat in honor of his graduation, which we were celebrating with this trip.

And so, that's the story! If you go to Chicago, don't bother with Uno's or Due or any of the other places that offer a lesser specimen of the traditional deep-dish pizza. Remember Giordano's – truly, you will thank me … and I'll happily accept the gift of a frozen pizza to bake in my own oven as a demonstration of your gratitude!

NOTE: Don't forget to check out the "thank you" post for my followers, and leave a comment at the end of it if you're interested in the gift drawing: "L'Chaim -- To Life!"

Jamie @ True Confessions of a Frugal Wanna Be said...

OMG that pizza looks incredible. I have never seen one so deep. Crispy sounds perfect as well...

you're killing me! I miss Chicago... and that pizza! I think I may have just licked my screen :P

My goodness!!! You had two slices of that monster? My hats off to you girl ;-) It looks aazing and must have tasted like a slice of heaven. Pizza is the best ever!

Mmmmmm Cheese! I think it must be pretty close to the perfect food!

This is my absolute FAVORITE pizza, hands down. It is on my list of things to do very soon...head to Chicago and go straight to Giordano's. SO delicious!