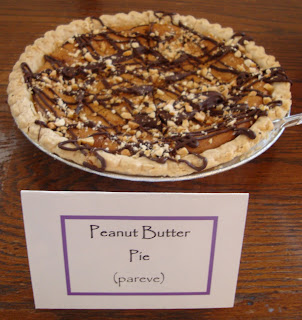 At Jeremy's graduation party over the weekend there were a number of dietary concerns to take into consideration, which is why we decided to simply serve desserts rather than hors d'oeuvres or lunch or anything more substantial (or nutritious!).

Many of the people we invited keep kosher, and thus cannot mix meat and dairy products at the same meal. One of our friends has a severe dairy allergy, and so that would have mandated a meat meal if we'd had any notion of providing something for him to eat; but it would have had to meet Rabbinic standards, which would make it prohibitively expensive.

Then, if we'd served a meat meal, that would have relegated our vegetarian friends to eating salad or vegetable sticks or hummus because they won't eat fish, and goodies like macaroni and cheese couldn't be served; and none of this even takes into consideration the picky eaters (bane of my existence) ... oy! My head started to spin in trying to find options for everyone, and so I finally gave up and settled on sweets, a universal favorite.

Those who keep kosher, for the most part, will eat dairy products which have been made in a treyf ([TRAYF] = non-kosher) kitchen like mine. And they'll especially eat things that are pareve [PAHRV], which is neither meat nor dairy such that they can accompany either type of food. And so this was easy -- bake some cookies with toffee chips that were dairy ... serve some fruit, which is obviously vegan ... and make use of items like soy milk to make pareve options. Everyone, in theory, should be happy! (As you can see from the card in the photo above, I labelled each offering so that people would know which category it fell into and not put their health -- or my peace of mind, God forbid! -- at risk.) 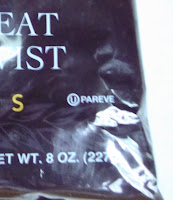 When I make pareve items I use non-dairy chocolate chips (which I could pay a lot of money for at a health food store, but which conveniently can also be found as the generic brand at a local grocery store), though you could easily use any other type of chip you want to if dairy products are not a concern. (Although this photo actually shows a bag of pretzels, you can see the designation for the item being "pareve" right next to the OU symbol, which is the highest certification for meeting kosher standards. "Oh, so that's what that little doohickey means! I always wondered ....") And the non-dairy butter substitute of choice -- frankly, the only one I'll use after extensive searching for one that works properly and tastes good -- is Earth Balance. It's still not quite butter, but ....

So today I'll share with you a pareve recipe which works for people who keep kosher, as well as for folks with dairy allergies or lactose intolerance. My Peanut Butter Pie is truly rich, luscious, delicious, and indulgent. Enjoy!!!

Place the crust into a pie pan. Preheat the oven to 350 F.

In a large bowl, combine the egg yolks, brown sugar, peanut butter, corn syrup, soy milk and vanilla extract. In a medium bowl, beat the egg whites until stiff peaks form, then beat them into the peanut butter mixture.

Pour into the pie crust and bake for 30 minutes or so until the filling is set when tested with a toothpick. Cool completely.

Melt the chocolate chips and drizzle the melted chocolate over the pie. Sprinkle with the peanuts and let set until chocolate firms up.

Oh, God Bless You! I've been looking for a recipe like this for YEARS. My grandma made it for me once and then promptly lost the recipe and I just remember it being the richest, most delicious thing I have ever tasted. Thank you Thank you!

Hi new friend! Love the recipe! Found you on the Tuesday Tag-Along! Have a great day!

Wow!!!! That looks YUMMY!!!! I am having the hardest time losing these last 7 pounds because I have been craving dessert sooo bad! I want to make this pie right now and eat the whole thing! ;)

Looks yummy!!
I'm your newest follower from TTA...please visit my blog when you get a chance!
Thanks,
Jennifer @ The Craft Barn
http://thecraftbarn-ny.blogspot.com/

Hi Yenta! Your situation sounds like my life. I have one daughter who will eat anything, one daughter who eats her own version of kosher (since we don't keep a kosher kitchen) ever since returning from a semester in Israel, and my husband and I are vegetarians. BTW, that peanut butter pie looks soooo yummy. Thanks for following me. I'll try to help you with your home style and maybe I'll learn how to be a better cook from you. My Grandmother and Mother were and are fabulous cooks, but I didn't get that skill so much. I look forward to reading your posts!

That pie looks so good! I'm hungry! :)
I'm following you from Tag Along Tuesday! Hope you have a great day!
http://murrayfamily213.blogspot.com/

Check my blog out when you have a chance :)))I have some amazing giveaways going on...

Thank you for the wonderful explanation on kosher and all that. I've always wondered.
Your pie looks yummy, I'll be making this soon.
Thanks for stopping by my blog!
http://songberries.blogspot.com

Great recipe...I am passing this on to my friend too. I cannot wait to try it.

All I could think when reading this post is how hard you work to make everyone happy. That is a tall order my friend. Moreover, it really isn't possible. You will do your best with it, but you are bound to make someone unhappy at some time. I know this too well because I have a lot of food allergies and going to eat at other people's houses is a nightmare. It really is awful. It gets to the point that I don't even want to go. There have been times that there isn't even ONE THING that I can eat. Then they feel terrible and are apologizing up and down and it isn't their fault. They tried to make a nice meal. So, there is a point when you do just have to step back and do the best you can without falling all over yourself. As a people pleaser myself, I know how hard this is BUT you gotta do it or you will burn yourself out. Just think about it. BTW, the peanut butter pie looked wonderful.

That pie looks so tasty! how can you go wrong with peanut butter and chocolate? yum yum!

Here from TTA
Love your blog!

Hope you'll come check mine out

Oh, Robin, you are talking to the queen of people pleasers -- didn't you see my tiara in yesterday's photo??? I've got a post coming on Monday about my childhood, in which I was always told that other people's happiness was dependent upon me. And I want to be a good hostess and make sure my guests are fed. And after my break-up, or whatever it is (ill-defined and vague), I've needed a lot of baking therapy. The perfect storm! But I do know what you mean ... I try to reign it in, but it's hard to overcome a lifetime's worth of messages ....

Well you know I'm already following, but I wanted to say "hello" anyways and, of course, curse you for making this recipe which I will now have to make myself and gain back the little weight I've lost because I LOVE PEANUT BUTTER!!!!!!!!!!!

The best part is that my mother in law will be able to eat a piece because she's lactose intolerant.

Dania (and anyone else who needs dairy-free recipes) -- here's a great site that only offers pareve recipes, so they're completely dairy-free: http://www.couldntbeparve.com/. Talk about temptation!

Holy cow that is intense! Your pie looks so so yummm though!

Hi, I'm a Mailbox Monday hostess from A little of this A little of that. Thanks so much for joining our blog hop! I searched all over your site to subscribe by e-mail with no luck. However, I'm now a GFC follower!

SHUT UP! This feeds into one of my biggest weaknesses.. PEANUT BUTTER. I could put it on an old boot and love every bite. You're too much. And I see your blog is growing in leaps and bounds. How'r doing it? I want your secret. Love, Keri

oh my this pie looks good,
dropping by for a visit via welcome wednesday.
I'm your newest follower and hope you can follow me back at
www.threejewelsinmycrown.blogspot.com