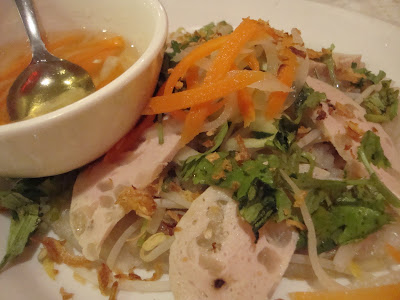 Wendy and I meandered through an evening recently, first attending a class about Rembrandt's representations of Jesus and other Biblical figures, then learning about a cross-country bike ride being planned for this summer by Hazon, the country's largest Jewish environmental group. (That last part was for Wendy's benefit alone - she who recently completed a half-marathon. I cook, I bake, I write, I eat. I like to go for long walks. If I remember, I use free weights ... but that's pretty occasional unless my blogging buddy Sheila, the personal trainer behind Reforming U, is nudging and encouraging me!)

After all of these adventures, we were hungry. We tried to go to one place that had been recommended as an inexpensive option, but it was closed; so we walked over to Dalat [dah-LAHT] - today's Frugal Floozie Friday feature - and enjoyed some lovely Vietnamese cuisine at a family-run restaurant.

Wendy and I could have split one of the many dishes on the extensive menu, but we decided to go for a bit more variety: we ordered one of each of the four appetizers. 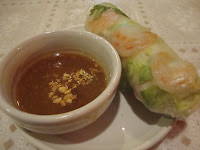 The first item we tried was the Vietnamese Shrimp Roll for a mere $1.30: "A salad roll of shredded chicken, shrimp, lettuce, bean sprouts, cilantro and rice vermicelli wrapped in translucent rice-paper. Served with peanut sauce." This was not some measly egg roll-sized portion, but rather it was very generous - lacking a ruler and spatial ability, I would guess 7" x 1-1/2". It was packed with all of the listed ingredients, and artfully presented with the shrimp peeking through the translucent rice paper. The peanut sauce was sweet, not at all spicy, and complemented the vegetables beautifully. 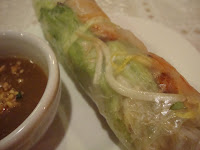 Our next treat was the Dalat Special Roll, for $1.95: "A Special salad roll of grilled chicken, shrimp, shredded pork, lettuce, bean sprouts, cilantro and rice vermicelli wrapped in translucent rice-paper. Served with peanut sauce." It sounds quite reminiscent of its predecessor, but the flavors of each appetizer were remarkably different. The slight difference in ingredients combined with the modification in preparing the fillings created a taste that was not quite like the other. 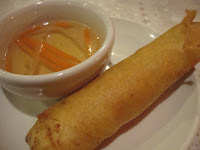 Next on our list of taste treats was the Vietnamese Egg Roll for $1.35: "Deep-fried roll of chicken, thin transparent noodles, black mushrooms, shredded cabbages and carrots. Served with Vietnamese sweet and sour sauce." The exterior was just as crisp and flaky as expected, with an abundant filling that nearly fell out once freed when bitten into. The dipping sauce was more sour than sweet, which I liked very much; Wendy, however, doesn't care for anything vinegary. I found that the tartness was an ideal complement to the simplicity of the vegetables.

Our final selection (pictured at the top) was the Steamed Rice Roll with Sliced Pork Loaf, our greatest expenditure at only $4.95: "Steamed rice roll stuffed of chicken, black mushrooms & onions topped with sliced Vietnamese pork loaf, cucumber, bean sprouts & fried onions. Served with Vietnamese sweet and sour sauce." The vegetables were fresh and crisp and vibrantly flavored, while the sliced meat was intriguing and unique. This salad was quite substantial, even when shared, and was quite nice without the sweet and sour sauce but also enhanced by it, as well.

For $10 - right on the mark of our $5 per person Frugal Floozie Friday budget - Wendy and I shared an abundant meal of tremendous nutrition, flavor, freshness, variety and value. What a great deal!

Mary, you never cease to amaze me with the great variety of food you find!

Yumm! It all looks really delicious. And what a bargain to boot! Hubby and I are sighing a bit about the fact that there isn't an authentic Vietnamese restaurant within 50 miles of us.

Even tried doing a google search for our area and came up with a few diners, and places that said they serve "chicken dinners". Hmmm...

We do have plenty of Chinese and Japanese restaurants, but that's about it. I guess we'll just have to experiment a bit by making it ourselves!

I can't believe the deals that you find, Mary. This might be my favorite find so far! I love Asian food so much. Yum!